Warren Buffett thinks he could own 100% of Bitcoin 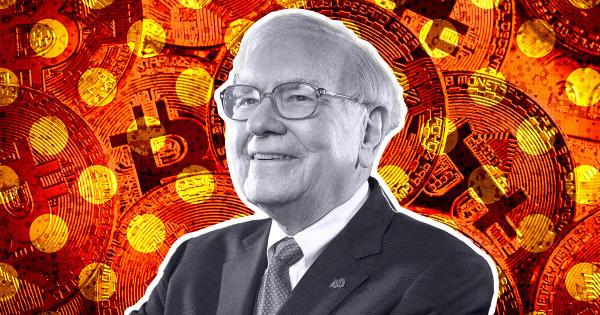 Notorious investor, Warren Buffett, reaffirmed during the Berkshire Hathaway Annual Shareholder meeting on Saturday that he would not even pay $25 for all the Bitcoin in the world.

Talking via a live stream of the meeting, Buffett believes “there are all kinds of people watching this that are long Bitcoin, and there’s nobody short.” There is plenty of markets, derivatives, and strategies to short Bitcoin.

Exchanges such as Binance have their BTCSHORT token, you can buy put options or short futures positions on platforms such as Deribit, or you can borrow Bitcoin, sell them, and wait to buy back at a lower price to repay the loan. It seems unlikely that Buffer is unaware of all the platforms worldwide that allow you to short Bitcoin, but perhaps he is.

Arguably, Buffett, 91, and his partner, Charlie Munger, 98, are not a generation that can understand what Bitcoin means to Millennials and GenZ. Grimes, the artist and former partner of Elon Musk, recently defined humanity as having evolved from “homo-sapien to homo-techno” with no sense of irony. She claims that “our brands are fundamentally changed, everyone who grew up with electronics, we are fundamentally different.”

Whether the science backs this up, it highlights a fundamental difference in the thinking between Millennials and Buffett’s ‘Silent Generation.’ When the modern internet web browser was created, Buffett was 65, whereas anyone under 27 has never lived in a world without the internet. This is the basis for Grimes’ theory that computers and web 2.0 have forever changed the way the human brain operates, and there is medical research to support this claim.

It may be that investors such as Warren Buffett will always struggle to understand the ‘value’ of digital assets because their brains are not wired to do so. Buffett went on to explain how Bitcoin.

He goes on to say if someone came to him and said they owned all of the Bitcoin in the world and wanted $25 for it, he “wouldn’t take it because what would I do with it?”

However, it seems like he is missing that anyone with a modicum of understanding of crypto would agree with him on this. If someone owned 100% of the world’s Bitcoin, it would indeed be without value and not worth $25. Buffett comes from an era where it has been possible to own 100% of something and set your price based on holding a monopoly over a specific industry or commodity. He says,

“If I have all the Bitcoin… what am I going to do with it except sell it back to you?”

“TRUST, NOT MONEY, MAKES THE WORLD GO ROUND
Imagine a world where everyone can trust everyone – or where trust isn’t even an issue any more.”

The value of money

Further, the same analogy could be made of fiat currency. If someone owned all the US dollars globally, what could you do with them? What value would it have over a cryptocurrency 100% owned by one individual? The gold standard is long gone, but perhaps Buffett, 46 years old when it was demolished, still sees the fiat dollar as having the same intrinsic value as its gold-backed ancestor.

The value of Bitcoin comes from the power of the shared infrastructure, zero-knowledge proofs, decentralized consensus mechanisms, apolitical control, and its ability to integrate with the digital future of humanity. The use of paper money is declining as services such as Apple Pay and other contactless payments become more convenient. In a web3 world, crypto payments are likely to be even more convenient, and paper cash will be obsolete in many aspects.

“In my life, I try and avoid things that are stupid and evil and make me look bad in comparison to somebody else – and bitcoin does all three.”

Buffett and Munger historically have preferred more traditional investments. When asked about the poor performance of tobacco stocks in 1997, Buffett remarked,

“we have owned tobacco stocks in the past. We’ve never owned a lot of them, although we may have made a mistake by not owning a lot of them.”

In the same 1997 talk, Munger continued,

“we have to draw the line somewhere between what we’re willing to do and what we’re not, and we draw it by our own lights.”

Munger’s Daily Journal Corp owns shares in US Bancorp, American Express, Bank of America, and Wells Fargo to a value of $212 million, all of which could be threatened by the rise in cryptocurrency and decentralized finance.

Munger’s statement that we have to draw the line between what we’re willing to do and what we do not ring very true in a world where the top 12% of the world’s population owns 84% of the money. Decentralized finance is an opportunity to bring back the balance. It will not happen overnight but to say that Bitcoin has no value because it doesn’t do anything is to ignore 4.6 billion people who own less than 26% of its wealth.