VeChain’s token rose 5% after an announcement from the VeChain Foundation unveiling a new development plan and whitepaper. 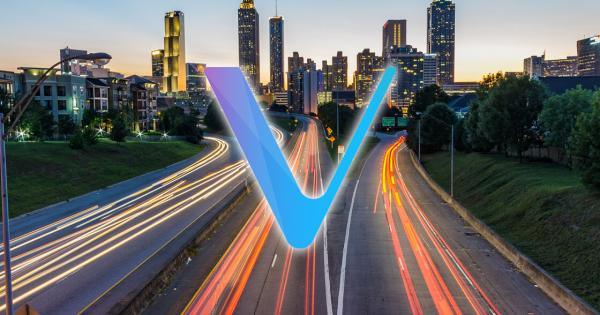 Photo by Joey Kyber on Unsplash

VeChain’s token rose 5% after an announcement from the VeChain Foundation unveiling a new development plan and whitepaper. The blockchain-based product ID and supply chain management platform’s release details upcoming partnerships, a new governance model, and the future of the VeChain project.

Announced on Twitter on May 20, the new development plan and whitepaper identifies four key obstacles that must be overcome in order to foster widespread adoption of blockchain technology in the enterprise sector, providing a detailed plan of attack with the aim of creating a “a trust-free and distributed business ecosystem platform to enable transparent information flow, efficient collaboration, and high-speed value transfers.”

Unveiling our "Development Plan and Whitepaper" with an updated governance structure, economic model, and new use cases. This piece will gradually be updated throughout its existence to reflect the goals and growth of the VeChainThor Blockchain.https://t.co/6tjZOaWIrK

The VeChain internal alpha test is currently underway with an array of third-party cybersecurity and code auditors analyzing the VeChain ecosystem ahead of a public alpha test, which is set to occur in early June. The public alpha will see which 100 public testers receive bounties for identifying issues in order to improve the VeChain project.

The upcoming public beta may be the first time that the VeChain code base is available to the public, but the new white paper release provides cryptocurrency market participants with a deep insight into the vision of the project and the manner in which the VeChain foundation plans achieve it.

Public blockchain projects, according to the VeChain foundation, lack four key elements — a proper governance model, efficient economic models, regulation and compliance capabilities, and a multidisciplinary approach to the implementation of new technology. The core focus of the VeChain development team, according to the release, is the creation of new, more effective business models in blockchain:

“The biggest challenge the VeChain team has been facing during the use cases development and implementation in the past two years is not the technical concerns, but the business consensus of how to achieve new business models.”

The new development plan highlights the progress VeChain is making in forging industry partnerships and accelerating adoption, noting an upcoming BMW partnership announcement. VeChain’s BMW partnership was confirmed by CEO Sunny Lu earlier this year, but an official announcement from the automotive giant is likely to capture a significant amount of investor interest.

“BMW, as our new partner, is building up another solution on VeChainThor platform. More details will be announced directly from BMW later once it is ready to go.”

Also covered in the release is a collaborative effort between PwC, China Unicom, and Liaoning Academy of Agricultural Sciences in order to develop a blockchain-based cloud project that will assist with China’s Agricultural Cultivation Management Plan.

Other partnerships covered in the development plan and white paper include detailed insights into VeChains food and beverage industry digital assurance solution created in tandem with MyStory, which will see the VeChainThor blockchain and hardware tags used in the Italian wine industry.

Patrick Tang, the CEO of Plair Foundation, commented on ICO in a Medium announcement post:

“VeChain brings to the table a powerful combination of professional advice, resources and community backing that is needed as a premium blockchain partner. We are excited to work together to pioneer a way to better serve gaming enthusiasts.”

Market response to the white paper release has seen the token recapture lost ground, rising from $4.23 to $4.52 in a positive price swing. With an official BMW partnership announcement in the works, the token holds strong potential to break out of its position as 16th highest crypto by market cap.