Turkey embraces Bitcoin and Tether as the lira keeps spiraling down

Crypto trading volumes using the lira reached a 15-month high as Turks race to get rid of their national currency. 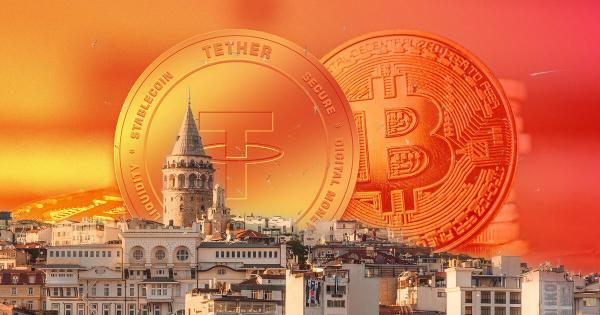 The volatility of the Turkish lira is pushing Turks to adopt cryptocurrencies as both a means of payment and a store of value.

The country’s national currency has lost 40% of its value against the dollar since September 2021, leading many to turn to Bitcoin and Tether as alternatives.

Turks ditch the lira, trading gold and dollars for stablecoins

After almost two decades of unbridled growth, Turkey is now suffering from devastating inflation that’s brought its national currency to its knees. Once a sprawling economy, Turkey is now hanging on a thread trying to instill any kind of value into the lira.

However, its citizens are becoming increasingly skeptical of the government’s ability to avoid total currency debasement, and have turned to an even more volatile asset to hedge against potential crisis—cryptocurrencies.

Recent data from blockchain analytics company Chainalysis showed that crypto trading volumes using the lira reached a five-quarter-high in Q4 2021, with an average of $1.8 billion a day traded across Binance, BtcTurk, and LocalBitcoins.

More than half of the trades against the lira in December involved Tether (USDT). The lira became the most traded fiat currency against USDT, outpacing both the U.S. dollar and the euro.

The growing appetite for stablecoins in Turkey stems from the country’s age-old way of weathering economic turmoil—keeping their money in dollars. According to the Wall Street Journal, two-thirds of Turkey’s banking deposits are foreign currencies, with most of them being dollars and euros.

The huge foreign currency deposits don’t go unnoticed by the Turkish central bank, which loans the dollars from private banks to intervene in foreign exchange markets in order to give the lira some footing. However, as most of the central bank’s efforts to prop up its currency were unsuccessful, many Turks have lost the little faith they had in both their government and the country’s banks.

A lot of them believe that a financial crisis is inevitable. If that were to happen, there would be a rush to withdraw dollars—which would have to be taken back from the central bank.

To avoid this, tens of thousands of Turks have been exchanging their bank-held dollars for USDT and then using the stablecoin as a gateway to Bitcoin.

“The Turkish lira’s volatility and rising inflation seen in recent months has led our investors to see cryptocurrency as a profitable investment in the long term and as a hedge against inflation in the short term,” said Esra Alpay, the chief marketing officer of Turkish crypto exchange Bitlo.

Turkey goes all-in on the metaverse, but is the public ready?

Crypto in Turkey: Everything you need to know