If you’ve perused the annals of Bitcoin, you’ve likely heard the term “SegWit” or “Segregated Witness” mentioned many a time. 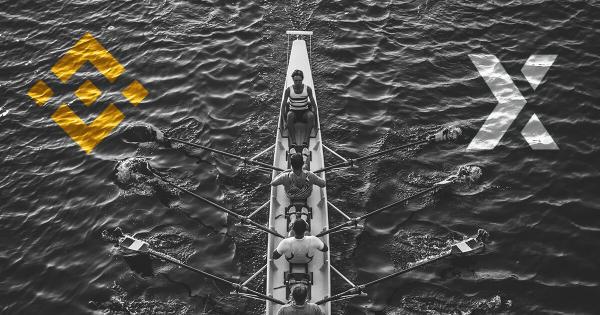 If you’ve perused the annals of Bitcoin, you’ve likely heard the term “SegWit” or “Segregated Witness” mentioned many a time. SegWit, for those unaware, is a controversial scaling technology that effectively reduces the computational size of Bitcoin transactions, allowing for more transactions to be fit into each block and for users to send the cryptocurrency at lower cost.

Activated in 2017 during the hard fork that spawned controversial cryptocurrency Bitcoin Cash, SegWit has been widely adopted by cryptocurrency service providers; ShapeShift, Coinbase, and Bitfinex are among the prominent Bitcoin exchanges that have implemented the non-mandatory technology over the years. In fact, SegWit adoption tracker Segwit.Space reports that just over 56 percent of all BTC transactions are issued using SegWit addresses, which has drastically increased Bitcoin’s transactional throughput.

Despite this, some service providers have held off in adopting this improvement (some argue it isn’t an improvement) to the Bitcoin blockchain. The most notable of these non-adopters being Binance, Poloniex, and Blockchain.com.

Due to the fact that Binance is one of the largest cryptocurrency exchanges, both investors and proponents of the scaling technology have long urged the exchange operators to bite, to add SegWit support for their clientele in a bid to reduce fees and make the user experience better.

And, should a promise from Binance’s chief executive, Changpeng Zhao, be fulfilled, Binance may finally launch support for SegWit addresses in the following two weeks.

Earlier this year, Udi Wertheimer, a well-recognized Bitcoin proponent and coder, suddenly reached out to Zhao via Twitter, making a fun yet serious proposition to the exchange executive: Wertheimer would change his profile picture to the Binance logo for the rest of 2019 if the exchange added support for SegWit and the generation of new Bitcoin addresses to increase user privacy. He wrote:

“Hear me out [CZ], if you add full segwit support (segwit deposits, and withdrawals to Bech32) + allow generating new deposit addresses (to avoid address reuse), i will change my profile pic to the Binance logo for the rest of 2019.”

Zhao, surprisingly enough, responded to the offer of the self-proclaimed troll, remarking that Binance will do the “first part first,” referencing Wertheimer’s call for the support for SegWit.

Since that funny Twitter exchange in October, however, Zhao has been mum on the matter, not commenting on his firm’s progress on SegWit support. Even now, just two weeks out from the tentative end-of-year 2019 deadline, Binance support for cheaper Bitcoin transactions seems to be but a quixotic dream.

This has prompted the original creator of this ‘deal’ to poke Zhao, and Tron founder Justin Sun too, remarking in a Twitter quip published Dec. 17 that:

“It’s been a while since his commitment to full segwit support and preventing address reuse on Binance in 2019, and time is running out!” 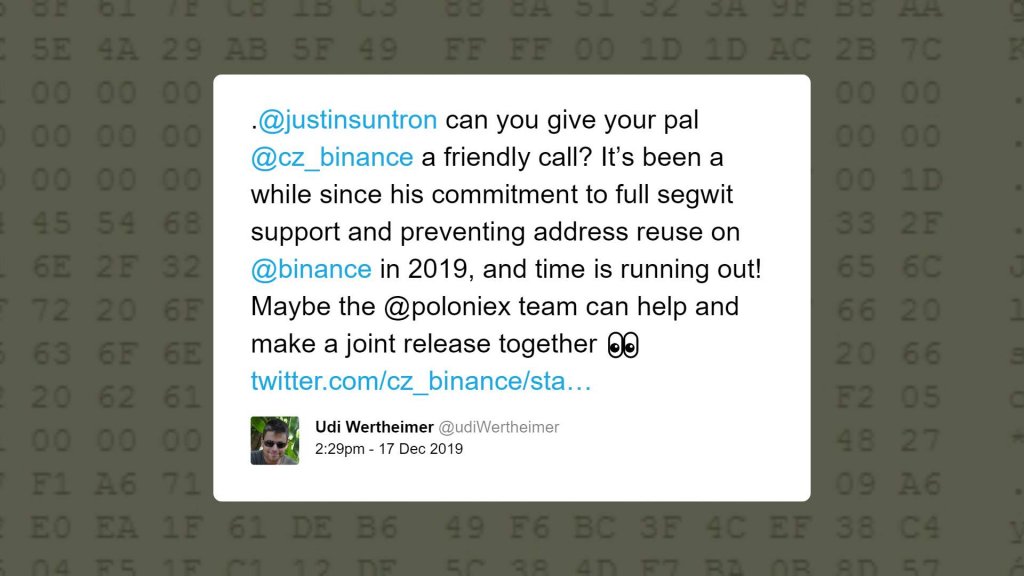 This time, it wasn’t Zhao that responded, it was Justin Sun—Wertheimer’s call for urgency on Binance’s end went seemingly unread.

The Tron founder, who was recently revealed to have rather close affiliations with another cryptocurrency exchange Poloniex, responded by saying that “Poloniex would like to show its commitments to full SegWit support along with Binance in 2020.”

So, it seems that while the 2019 promise won’t be upheld, Binance intends to add support for Bitcoin SegWit…eventually.

Not only one under pressure to implement SegWit

Binance is far from the only crypto company to have been under the spotlight for not yet adopting the aforementioned Bitcoin technology; prominent cryptocurrency wallet and infrastructure provider Blockchain.com, too, has been lambasted time and time again for its lack of SegWit functionality.

This controversy reached a point that on Dec. 17, outspoken Bitcoin investor Alistair Milne claimed that Peter Smith, CEO of Blockchain.com, blocked him on Twitter for asking “when SegWit?”

Apparently asking 'when SegWit' gets you blocked … pic.twitter.com/8ipeQu2lFs 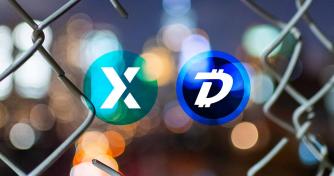 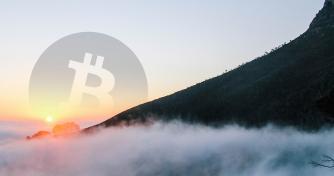 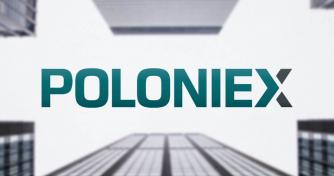