Yuga Labs announced they acquired the rights to CryptoPunks and Meebits and they will grant commercial rights to NFT owners before they decide what comes next. 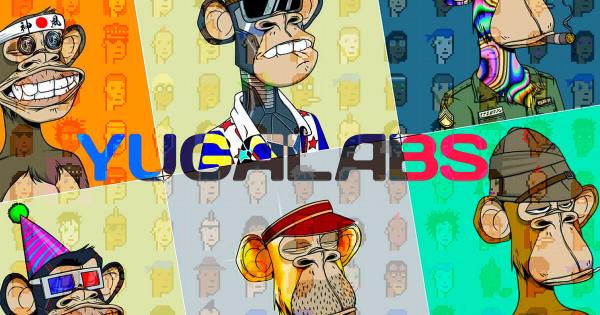 Yuga Labs is known as the creator of the Bored Ape Yacht Club (BAYC) and Mutant Ape Yacht Club (MAYC) NFTs. Their original collection BAYC included 10,000 Apes and was released in April 2021.

MAYC, on the other hand, is a collection including 20,000 Mutant Apes. As a part of the MAYC project, the Yuga Labs team arbitrarily airdropped 10,000 Mutant Serums to every Bored Ape holder in August 2021. When Bored Apes were exposed to these serums, they’d turn into a unique Mutant Ape NFT.

Serums also came in three different versions based on their transformational strength, which created more diversity with the MAYCs. In addition, BAYC holders were allowed to swap their serums for a fee to enable each user to create the MAYCs they wanted.

Why BAYCs are a big deal?

The success of BAYCs was not solely the creative thinking behind it. The project launched with two distinct characteristics which immediately captured the commit attention: flat pricing at 0.08 ETH and licensing of commercial rights. Flat pricing prevented a FOMO wave and led to a quick sell-out.

I created a Bored Ape IPA at my brewery in MI. Alcohol is tough due to liquor laws but it’s been awesome so far. Been able to get to two Bored Ape meetups (LA & Chi) and connect with a bunch of apes. pic.twitter.com/B38cBVv8Xk

By acquiring CryptoPunks and Meebits IPs, Yuga Labs now own the brands, copyrights in the art, all IP rights for both collections, as well as 423 CryptoPunks and 1711 Meebits.

According to the announcement, this purchase came up organically during conversations and was mutually agreed upon. Yuga Labs team expressed their admiration of Larva Labs by stating:

“Their work moved NFTs, the Ethereum blockchain, and the entire crypto space forward, and influenced how we built BAYC. We’re honored to shepherd the CryptoPunks and Meebits brands into the future as part of the broader ecosystem we’re building.”

The founders of Larva Labs, Matt Hall, and John Watkinson told they trusted Yuga Labs with the future of CryptoPunks and Meebits by saying:

“Yuga Labs are the innovators of the modern profile picture project, and the best in the world at operating these projects. They are the ideal stewards of the CrytoPunks and Meebits. In their hands, we are confident that they will continue to be vital, thriving projects in the emerging decentralized web.”

What will happen now?

Along with the acquisition announcement, Yuga Labs also declared that they will be giving CryptoPunks and Meebits holders full commercial rights. The team shared their sentiments through Twitter and said it was terrific to watch BAYC holders’ creative usage of their commercial rights, and they couldn’t wait to see CryptoPunk and Meebit holders’ as well.

It’s been amazing to watch the BAYC ecosystem use their rights to collaborate and build awesome shit we never could have dreamed up. We can’t wait to see the Cryptopunks and Meebits communities do the same.

After issuing the commercial rights, the team said they’d wait and listen to the community figure out their following action.

That being said, they also reminded that these new additions are not intended to create competition by stating:

“We want to grow the pie, not fight over slices.”

Yuga Labs team further added that they are deeply engaged with the community formed around BAYC, and they intended to keep it as the center of their universe.