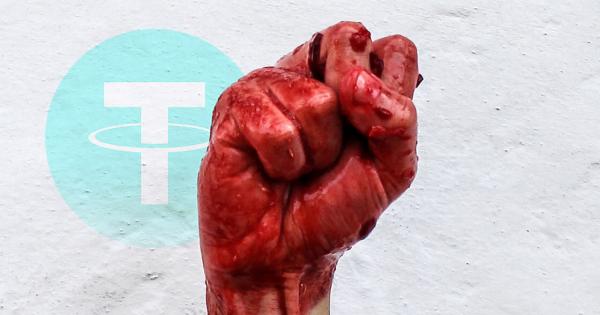 On Sept. 25, the crypto market experienced one of its steepest falls in recent years as the bitcoin price abruptly dropped by more than $1,500 in merely hours, sending many cryptocurrency investors to Tether.

Tether, a stablecoin said to be run by iFinex, the parent company of a major cryptocurrency exchange in Bitfinex, has often been used as a hedge option for cryptocurrency investors, especially amidst sharp pullbacks and corrections.

As investors flocked to Tether to safeguard their holdings in crypto assets, the daily volume of the stablecoin spiked to levels unseen before.

Will the crypto market continue to correct?

“A range of 100 days just broke to the downside. If this is a bullish shakeout it’ll be obvious once BTC reclaims $10k. If this is bearish I don’t want to be long. Buying this feels like buying $5500 after the $6000 break. Something I’m not willing to do,” he said.

Continuous sell-off of bitcoin and a bigger pullback in the crypto market will inevitably lead the volume of Tether to surge, forcing more investors to hedge to last an extended correction.

As the bitcoin price fell by $1,500, other crypto-assets like Ethereum, EOS, and Litecoin demonstrated losses in the range of 20 to 40 percent against the U.S. dollar.

A good month for Tether

This week, Tether secured a motion from a court in New York in an ongoing case in which the New York Attorney General’s office alleges iFinex of mismanagement, that would prevent the company from having to hand in additional documents to the court.

“We are gratified by the panel’s decision and we look forward to addressing the significant substantive issues before the appellate court,” a representative of iFinex said, Forbes reported.

Although Tether may be requested to send more paperwork in the future, for now, the company has found itself a small win in a challenging case.

With daily volume noticeably on the rise and the company seeing some progress in the New York case, it has been a good quarter for the stablecoin so far.

“The injunction that prohibits the movement of money between Tether and Bitfinex is still in place. We look forward to making our case in court as we seek to have Judge Cohen’s decision upheld and continue our investigation,” the New York Attorney General’s office said.