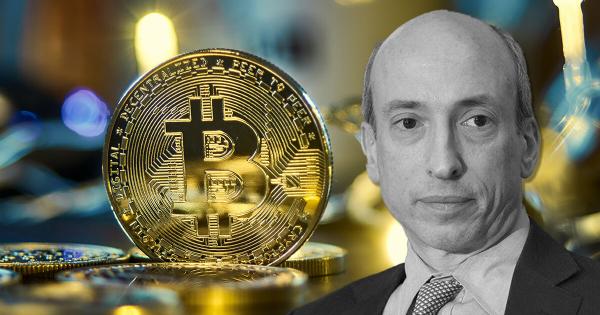 SEC Chair Gary Gensler finally reveals his stance on Bitcoin by saying he doesn’t support its “off-the-grid” approach to finance.

“In 2008, Satoshi Nakamoto wrote this paper in part as a reaction, an off-the-grid type of approach. It’s not surprising that there’s some competition that you and I don’t support but that’s trying to undermine that worldwide consensus.”

Given Gensler’s experience teaching blockchain technology at MIT, many billed him as the “right choice” to lead the securities regulator. But coming up to eight months since being sworn in, and it’s fair to say his tenure to date hasn’t advanced the cryptocurrency sector how many imagined.

More so, his recent comment above demonstrates that his allegiance lies with the legacy sector. But is this a surprise at all?

Bitcoin is the competition to the banking sector

“We layered over our digital money system about 40 years ago with money laundering and various sanctions and regimes around the globe; we layered that over a digital currency system called our banking system.”

He went on to say that Bitcoin launched, in 2008, as a reaction to the banking system. Adding that, he doesn’t support this “off-the-grid” approach as it undermines the banking consensus.

However, Satoshi Nakamoto said Bitcoin is necessary as an alternative to a system of currency debasement. In effect implying central banks do not operate in the people’s interest.

“The central bank must be trusted not to debase the currency, but the history of fiat currencies is full of breaches of that trust.”

The first BTC transaction, made on January 3, 2009, included a message about the UK Chancellor’s decision to bail out the Royal Bank of Scotland, Lloyds, Bradford & Bingley, and Northern Rock.

Gensler was supposed to be “the one”

Crypto markets were optimistic over Gensler’s appointment as SEC Chair in March. IOHK CEO Charles Hoskinson said it bodes well that he understands the blockchain space.

“The thing I like about the appointment of Gensler is that he is competent. He’s clearly a very smart guy and he fully understands our industry to the extent that he taught at MIT on our industry.”

However, Gensler’s unwillingness to end the SEC lawsuit against Ripple, plus a litany of similar incidents, including calls for greater oversight, demonstrates, at the least, he isn’t for free-market cryptocurrency reform.

Gensler has always maintained that his role is to protect retail investors from fraud and manipulation.