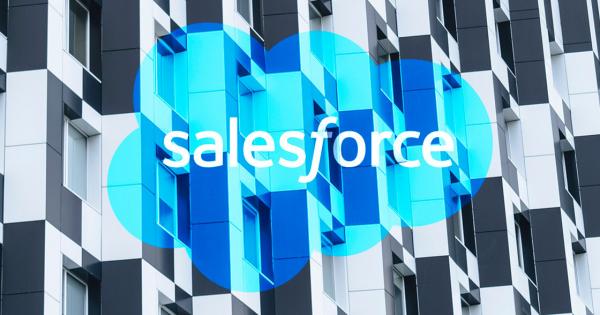 Salesforce, one of the world’s biggest providers of cloud solutions for businesses,  launched its own blockchain platform. Announced during its fourth annual TrailheaDX developer conference, the company’s new low-code platform, called Salesforce Blockchain, will extend the power of client relations management.

One of the biggest cloud software companies in the world, San Francisco-based Salesforce, has launched its own blockchain channel. First announced on May 29 during the company’s fourth annual TrailheaDX developer conference, the Salesforce Blockchain has been in the works for more than a year.

During the live stream at the conference, Salesforce said that is was looking for ways to help their clients increase connectivity, which required harnessing and sharing large amounts of data without sacrificing trust. Blockchain was the perfect solution for that, as it enabled the company to saves, trace and authenticate data across every employee and partner in the network, Salesforce president and chief product officer Bret Taylor explained.

“We help companies build for the future by making breakthrough technology accessible and easy to use—today we are doing just that with Salesforce Blockchain,” Taylor told Venturebeat.

He went on to state:

“Now, companies will be able to create new ecosystems and achieve new levels of interconnectivity through trusted partner networks.”

Salesforce Blockchain will enable admins to build and maintain networks, app, and smart contracts, as well as layer blockchain data on top of existing data and services. The blockchain, which is built on Hyperledger Sawtooth, is currently available only to select partners but should see a global rollout sometime in 2020.

One of the first clients that have joined the Salesforce Blockchain was Arizona State University. According to Venturebeat, the university plans on using the blockchain to track academic records. Kent Hopkins, vice president of enrollment at Arizona State University, said that the network had the potential to be a game-changer as it would make the process of exchanging academic records easier both for students and institutions.

S&P Global Ratings will be leveraging Salesforce Blockchain to improve and expedite the way they do KYC reviews, said Chris Heusler, the company’s global chief commercial officer. The company will be able to create a trusted network of reviewers that collate benchmarks, analytics, and data for global capital and commodity markets.

Research data company IQVIA is also among the selected few that are testing Salesforce’s newest product. The company will use Salesforce Blockchain to speed up the process of tracking and validating medical drug labels.

The former headquarters of CrunchFund, a venture capital firm founded by Michael Arrington, was sold via Propy, a blockchain-powered real estate platform.

ConsenSys entered into a partnership with LVMH and Microsoft to launch a new blockchain platform tailored for the luxury industry.

On May 7th, Microsoft announced the Azure Blockchain Service, a tool that helps developers and companies create, deploy, and manage blockchain networks.

Microsoft has announced the release of a new Azure Blockchain Development Kit for Ethereum.