Larsen joins the ranks of other prominent crypto figures who express caution over investing in Dogecoin. 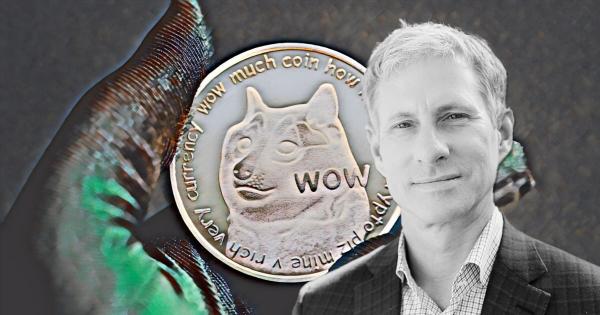 Ripple chairman Chris Larsen cautioned investors on the risks of investing in Dogecoin. He likened it to gambling, adding that most people who gamble end up losing.

Since blowing up off the back of the WallStreetBets movement earlier this year, a number of prominent figures in the crypto space, including Charles Hoskinson and Barry Silbert, have issued similar warnings.

But Dogecoin remains a top-10 cryptocurrency, albeit a far cry from its $89 billion market cap in May. Nonetheless, advocates argue that the detractors don’t understand the power of memes.

Larsen says the foundations are built on sand

Speaking on The FinanZe Podcast, whose target audience is Gen Z’ers (those born between 1997 and 2015), host Logan Lin asked Larsen for his thoughts on the Dogecoin phenomenon.

As much as people now go out of their way to disregard Elon Musk, Larsen raised the point that a significant part of Dogecoin’s success comes down to the Tesla boss. But just as he “bailed on” Bitcoin, Larsen thinks he could bail on Dogecoin.

“His participation in crypto has been weird. Kinda haphazard. Super big on Bitcoin, then he just bailed on them. I think he bailed on them for the right reasons, but woah. So if you’re a Bitcoin maximalist, you’re going to be feeling pretty bad about that, right? Same thing could happen to Dogecoin tomorrow…”

In his mind, to invest based on memes and Elon is nothing short of gambling. And Larsen says most people who gamble end up losing all their money.

“Look, if you’re going to get involved with DOGE because of the “to the moon” thing and Elon, just realize you are gambling. There’s no different from that and going to Vegas, other than I guess your listeners can’t go to Vegas yet. But you’re gambling plain and simple, and most people who gamble lose all their money.”

Dogecoin is down 74% from its local top almost three months ago. Although this week saw a revival of sentiment, as Bitcoin posted eight consecutive daily gains, Dogecoin has been flat in comparison.

Since last Wednesday, DOGE has been in a tight trading range of between $0.19098 – $0.22888. While Bitcoin broke decisively above its 50-day moving average on Sunday, the same could not be said about Dogecoin, which remains stagnant.

Its momentum has been firmly rooted in the bottom half of the RSI chart for the past ten weeks. And it looks as though RSI is starting to curl back downwards once again.

In short, based on the current situation, a miracle needs to happen for $1 DOGE.