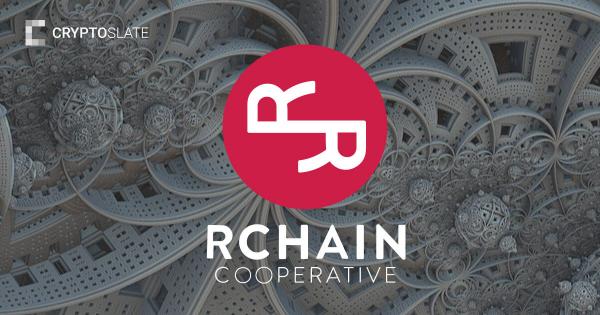 The drop in price possibly stems from a series of allegedly bad financial decisions—including the purchase of a 5-year audio codec license from Immersion Networks for $23.5 million, resulting in potential insolvency.

Initially RChain’s private community sale of RHOC raised $30 million, retaining a large reserve to continue financing ecosystem development. The rest of the organization’s assets are either held in cash, other cryptocurrencies, or real estate.

Readily accessible assets include $2.2 in cash and approximately $1.5 million in liquid cryptocurrencies. The company could also liquidate its $1.5 million property, which is allegedly a “house in Seattle for cooperative members to stay in,” according to the Block Crypto. These assets total roughly $5.2 million.

The organization also claims that it is holding approximately 480 million RHOC. CryptoSlate reached out to RChain Cooperative about its current RHOC holdings and received the following response from Derek Beres, the Cooperative’s director of content, providing the following figures:

Based on these current figures, the organization’s reserve of 465 million RHOC would currently be valued at approximately $13 million, down from $63 million.

Yet, daily volume for RHOC ranges from $90,000 to $400,000, which indicates that liquidating all $13 million worth of RHOC is likely impossible without significant slippage—meaning that RChain Coop is unlikely to receive the full $13 million if it sold its holdings.

In the footnote of the financial statements, the Cooperative even states that “RHOC is not readily transferable and illiquid as a monetizable asset,” further reaffirming this possibility.

Short-term liabilities are financial obligations that RChain Cooperative is required to pay within 12-months.

RChain’s contractual obligations—agreements that may be potentially renegotiable—include $5.6 million for “Immersion,” which is likely one of the payments for rights to the audio codec mentioned earlier—$2.2 million for “Management Fee Strategic Partnership” with “Reflective Ventures,” a blockchain specific venture fund that works closely with the organization—and, $3.6 million for “Pyrofex,” a contract blockchain development firm tasked with building much of RChain’s software.

Meanwhile, non-negotiable liabilities mainly revolve around taxes. The Cooperative estimates 2017 income taxes payable of $3.5 million and has not yet published estimates for 2018 income taxes and taxes related to revenues from selling RHOC.

Other notable, but smaller liabilities include $393,000 in “Founders Compensation” and $120,000 for “Website.” Overall, it’s uncertain which of these liabilities are renegotiable.

These liabilities total at least $16 million, not including pending tax estimates. Netted against accessible assets of $5.2 million, this leaves a deficit of at least $10.8 million that is contractually payable in under 9 months.

If the Cooperative is unable to pay its debts using its accessible assets (which it won’t be based on October figures), then the organization will either need to renegotiate its contracts, find additional financing, or liquidate a portion of its 465 million RHOC to remain solvent—or all of the above.

CryptoSlate reached out to RChain Cooperative president Lucius Gregory Meredith to comment on some of these concerns and has yet to receive a response.

It was previously reported that lead developer Medha Parlikar, CFO Kate Gonsalves, and three other board members have resigned from the Cooperative’s board. On Feb. 14th, the COO Kenny Rowe announced his resignation.

Rowe was the co-founder of MakerDAO and advisor to Aragon with experience in “sustainable governance.” When asked for comment on his motives for leaving, Rowe responded:

“I was offered another opportunity that was a better fit for me and my family.”

The high turnover in RChain’s leadership may suggest the organization is struggling. Combined with the organization’s potential financial difficulties, RChain Cooperative may be in trouble for 2019.

This post was last updated on September 9th, 2018 at 07:08 pmThird-generation smart contract platforms are seeking to improve upon the inefficiencies of derivative blockchains.

This post was last updated on September 9th, 2018 at 07:09 pmImprovement is iterative.