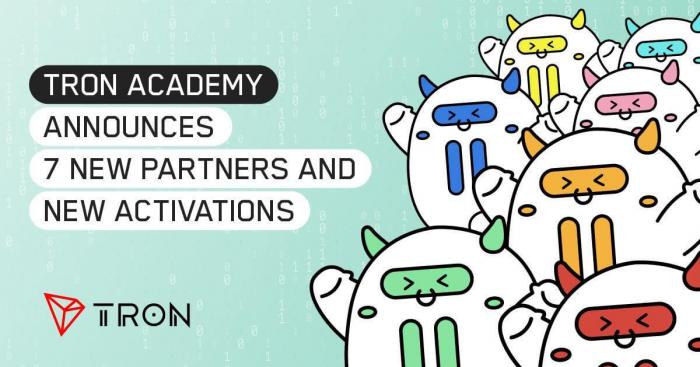 Geneva, Switzerland, 8th December, 2022, Chainwire — TRON DAO recently launched The TRON Academy initiative to empower young blockchain enthusiasts from top-tier universities around the world. Creators are being welcomed to take advantage of early-stage development opportunities in the TRON ecosystem. Partnerships have been developed with existing blockchain clubs, and coaching support is available for students interested in establishing new clubs on their campuses.

TRON Academy’s industry-leading curriculum provides a comprehensive blockchain education for the next generation of leaders. Students are encouraged to build blockchain solutions that do more than just provide everyday utility. TRON DAO leaders are also challenging university blockchain clubs to recognize the life-changing opportunities decentralized applications could provide. Instruction is provided that equips and enables developer teams to innovate and actualize new technologies. The hope is that resources will be created that are both essential to a decentralized future as well as enjoyable in a blockchain-based, web3 world.

TRON Academy officially launched November 12–13, 2022, as part of the TRON Grand Hackathon 2022 “Hacker House” event on the campus of Harvard University. Over 270 university students formed multiple development teams working all weekend to build decentralized applications (dApps) on TRON and BitTorrent Chain. Winners shared a $100K USD prize pool. The ultimate winners, however, were all the teams who returned to their respective campuses to experience an enriching community with their blockchain clubs.

On November 29, 2022, a TRON Academy workshop was held at the University of Texas at Austin, hosted by the Texas Blockchain club in collaboration with TRON DAO. A mix of non-technical and technical components of the TRON blockchain were discussed. TRON DAO leaders onboarded UT Austin students into the TRON ecosystem, some for the first time and others as a strategic next step. Students were also mentored to build their first smart contract on the TRON Virtual Machine along with deploying their first dApp.

Workshops like this one will be held on other university campuses as the TRON Academy program grows. It aims to partner with more and more university blockchain clubs around the world via this intentional, four-pronged approach:

TRON DAO is a community-governed DAO dedicated to accelerating the decentralization of the internet via blockchain technology and dApps.

Founded in September 2017 by H.E. Justin Sun, the TRON network has continued to deliver impressive achievements since MainNet launch in May 2018. July 2018 also marked the ecosystem integration of BitTorrent, a pioneer in decentralized Web3 services boasting over 100 million monthly active users. The TRON network has gained incredible traction in recent years. As of December 2022, it has over 126 million total user accounts on the blockchain, more than 4.3 billion total transactions, and over $9.5 billion in total value locked (TVL), as reported on TRONSCAN. In addition, TRON hosts the largest circulating supply of USD Tether (USDT) stablecoin across the globe, overtaking USDT on Ethereum since April 2021. The TRON network completed full decentralization in December 2021 and is now a community-governed DAO. In May 2022, the over-collateralized decentralized stablecoin USDD was launched on the TRON blockchain, backed by the first-ever crypto reserve for the blockchain industry – TRON DAO Reserve, marking TRON’s official entry into decentralized stablecoins. Most recently in October 2022, TRON was designated as the national blockchain for the Commonwealth of Dominica, which is the first time a major public blockchain partnering with a sovereign nation to develop its national blockchain infrastructure. On top of the government’s endorsement to issue Dominica Coin (“DMC”), a blockchain-based fan token to help promote Dominica’s global fanfare, seven existing TRON-based tokens – TRX, BTT, NFT, JST, USDD, USDT, TUSD, have been granted statutory status as authorized digital currency and medium of exchange in the country.

TRON is dedicated to building the infrastructure for a truly decentralized Internet.