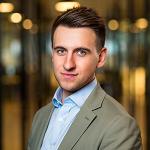 The University of Huddersfield, Bachelor's degree, Business Administration and Management, 2009-2012

Erhan Korhaliller is the Founder and CEO of Leading Blockchain PR Consultancy EAK Digital. EAK Digital represents some of the biggest projects in the blockchain space throughout Europe, American, and Asia. Erhan is also the presenter of EAK TV, interviewing blockchain’s thought leaders, including exclusives with Changpeng Zhao of Binance, Charles Hoskinson of IOHK and Cardano and Johnson Zhao of NEO.

Erhan is a regular speaker at major blockchain-related conferences as well as a respected MC/Host and moderator. Additionally, he’s CEO, Editor, and Host of the Absolute Influence brand, which includes a dedicated podcast where he interviews business leaders, journalists and marketing experts to gain valuable insight about their steps to success.

Erhan continues to lead from the front, giving PR a voice in the blockchain industry as a speaker at global events, and guest lecturing at the University of Huddersfield Business School where he assists with mentoring business students. Erhan has landed coverage in print and broadcast outlets around the world, including Forbes, Entrepreneur Magazine, International Business Times, Inc Magazine and Buzzfeed.