Novogratz: Cardano has no “traction with devs,” Hoskinson fires back

Mike Novogratz claims no-one (he knows) is developing on Cardano and that its status as "top-three" is undeserved. 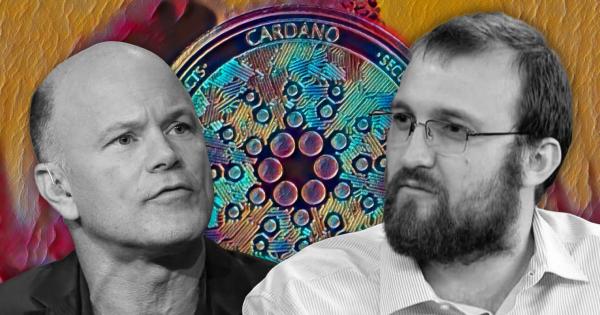 The CEO of Galaxy Digital, Mike Novogratz, said a discussion with 20 of the smartest people he knows showed none speaking highly of Cardano regarding “traction with devs.”

Not true. I spoke to twenty of the smartest people I know in the space, and zero of them saw cardano having traction with devs.

Hoskinson also fired back by declaring August 15 “Mike check-in day,” on which we revisit his original comment and presumably confirm how wrong he was.

“Here I can fix this statement for you Mike: “I’ve spoken to twenty of the smartest bankers I know in the space, and zero of them saw cryptocurrencies having any traction” 🙂 we all heard that one

With IOG declaring a definitive date for Alonzo Purple, the final phase of the smart contract rollout, Novogratz may well be eating his words sooner than you think.

The entire incident started innocently enough when Andrew Steinwold, Managing Partner at Sfermion, an investment fund that specializes in NFTs, asked about Cardano and whether devs are building on it.

“Why is Cardano the 3rd largest cryptocurrency?? Is there stuff built on Cardano that people are using? (Honest question, I know next to nothing about Cardano).”

Novogratz answered by saying its popularity is a mystery to him. Implying, its status as the third-largest cryptocurrency is unjustified.

Currently, Binance Coin is the third-largest cryptocurrency by market cap, with Cardano less than $500 million behind.

In any case, Novogratz’s comment drew a wave of criticism, with many respondents saying he had not done his research. In turn, Novogratz then cited anecdotal evidence of having spoken with 20 of the smartest people he knows. None of whom confirmed developer interest in Cardano.

The fifth round of Catalyst funding ended on July 19 and featured 267 different projects competing for $2 million of funding to build on Cardano.

Project Catalyst refers to a public funding system to drive community innovation on the Cardano blockchain. It works by ADA holders voting on protocols that they wish to see developed.

Funding is provided by “taxing” staking rewards, and the funding pool has grown from an initial $250k at Fund2 (the first “real” funding round, with a technical run-through, and 1 a dress rehearsal), to $2 million in the fifth iteration.

As such, regardless of Novogratz’s anecdotal evidence, it’s clear that devs are building on Cardano. During the mid-month August update, IOG confirmed that Alonzo Purple will ship on September 12.