While Bitcoin is not considered a security, this doesn't mean it shouldn't be regulated, suggests Jay Clayton. 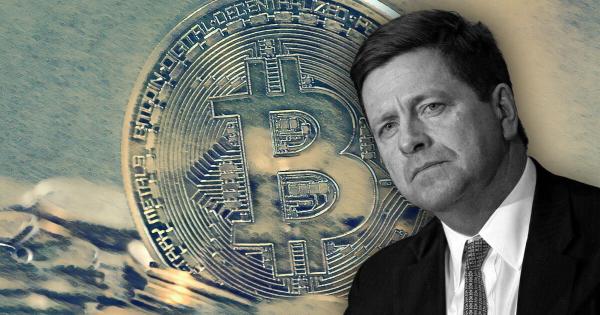 Former US Securities and Exchange Commission (SEC) chairman Jay Clayton has suggested that Bitcoin and other cryptocurrencies will definitely be more regulated in the future.

“I expect that regulation will come in this area both directly and indirectly,” he said during an interview with CNBC’s Squawk Box yesterday.

"Where digital assets land at the end of the day–will be driven in part by regulation both domestic and international, and I expect that regulation will come in this area both directly and indirectly," says Former SEC Chairman Jay Clayton on #bitcoin. pic.twitter.com/voWcgCFqOH

Clayton, who recently became a cryptocurrency advisor to investment firm One River Asset Management, noted that while Bitcoin wasn’t considered a security even before he joined the SEC, “it does not mean that it should not be regulated.”

“In fact, where digital assets land at the end of the day, which is very much a wide-ranging question, […] will be driven in part by regulation—both domestic and international,” Clayton explained, adding, “And I expect, and I’m just speaking as a citizen now, I expect that regulation will come in this area both directly and indirectly. Whether it’s through how these are held at banks, or securities accounts, taxation, and the like.”

What constitutes a security?

Notably, Clayton’s comments came amid the ongoing legal battle between the SEC and Ripple Labs, the company behind the XRP token. The regulator filed its $1.3 billion lawsuit last December (right before Clayton stepped down), alleging that Ripple—as well as its executives Brad Garlinghouse and Chris Larsen—have earned hundreds of millions of dollars by illegally selling XRP since 2013.

The SEC’s main complaint is that XRP tokens arguably have some characteristics of securities but weren’t registered as such. At the same time, during Clayton’s tenure, the SEC publicly clarified that neither Bitcoin nor Ethereum can be considered securities. This stance later became one of the main lines of defense for Ripple.

A Ripple spokesperson said at the time:

“The SEC has clearly picked two winners and ignored a growing and robust industry that is much larger than Bitcoin and Ether.”

We also filed a Freedom of Information Act request asking how the SEC determined ETH evolved from a security to not a security. No explanation or guidance was given why. We’re simply asking for the rules to be 1. stated clearly 2. applied consistently. 3/5

As CryptoSlate reported, the company is currently attempting to force the SEC to submit documents it holds on Bitcoin and Ethereum, demanding clarity on why BTC and ETH weren’t deemed securities and XRP is ostensibly being singled out.

Why this incoming U.S. Senator just shilled Bitcoin to millions on national TV