Ethereum has been severely underperforming Bitcoin throughout the past few days and weeks, with the second-largest cryptocurrency by market capitalization currently trading far below its yearly highs. 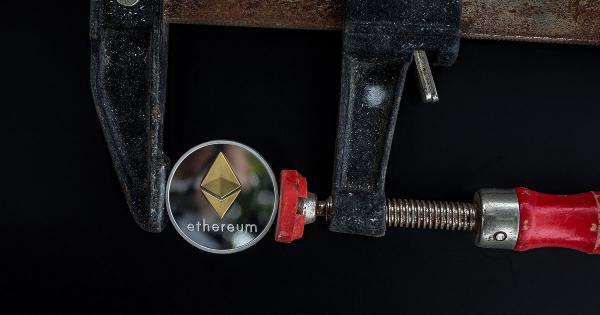 Ethereum has been severely underperforming Bitcoin throughout the past few days and weeks, with the second-largest cryptocurrency by market capitalization currently trading far below its yearly highs.

Meanwhile, Bitcoin’s price is currently trading at the highest price seen in well over a year, with bulls vying to break the $13,800 level and bring the crypto to fresh post-2017 highs.

Its current strength has only created a slight tailwind for ETH and other major altcoins, with investors currently shifting all of their focus onto the benchmark cryptocurrency.

Many analysts have speculated that there will, at some point, be a rotation of capital away from BTC and into altcoins like Ethereum, but it remains unclear how high it may climb before this takes place.

One reason why Ethereum could be underperforming its larger counterpart at the moment is due to a single on-chain trend.

An analytics platform noted in a recent tweet that Ethereum miners have been selling their ETH holdings rapidly, which could be why it has been severely lagging behind Bitcoin.

Ethereum has been hovering within the lower-$400 region for the past few days as Bitcoin slowly continues to push higher.

Yesterday, a sharp selloff seen by BTC sent Ethereum plunging to lows of $380, but the buying pressure seen at this region allowed bulls to quickly revert its downtrend and send it rocketing back up past $400.

Ethereum still needs to climb roughly 20 percent before reaching its 2020 highs of $490 that were set at the peak of the DeFi hype cycle.

Unless Phase 0 of ETH 2.0 is released shortly, it remains unclear what could catalyze any shift in its waning momentum.

One reason why Ethereum has been underperforming Bitcoin is due to miners offloading their holdings over the past few days.

Analytics platform Santiment spoke about this in a recent tweet, explaining that Ethereum’s miner balance has dropped swiftly over the past couple of days.

“The Ethereum miners have been dumping, and it appears that last week’s increased on-chain activity and trader FOMO has slowed.”

Until miners stop offloading their balances, Ethereum may continue lagging behind the benchmark cryptocurrency.

This could have far-reaching implications for the aggregated market, as most major altcoins have been taking Ethereum’s lead as of late. Until ETH can gain some momentum, other altcoins will likely stagnate.