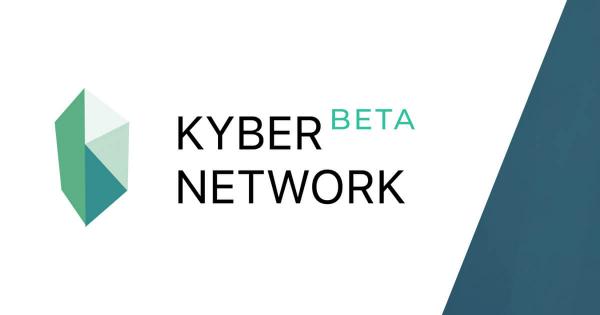 In November of 2017, the number of Coinbase users surpassed that of stock brokerage Charles Schwab. Centralized exchanges have become incredibly popular in recent years, despite their vulnerability to cyber-attacks. Moreover, they make a commission from every transaction made on their exchange. Kyber Network (KNC) desires to solve these issues through the power of decentralization.

Mainstream exchanges such as Binance, Bittrex, and Poloniex are all examples of centralized exchanges. They are vital to the survival of the crypto ecosystem, but they go against the fundamental principles of crypto: decentralization.

Centralized exchanges are subject to cyber attacks because they have ultimate control over your funds, instead of you. For example, in January of 2018, hackers stole more than 500 million dollars from Coincheck, a cryptocurrency exchange in Japan.

Of course, the Coincheck hack was not the first attack on a centralized exchange, and it will not be the last. In addition to the loss of funds, cyber attacks usually have a significant impact on markets. After the Mt. Gox hack in 2014, Bitcoin’s already low price dropped 22% to around $418.

Furthermore, they divide global trade into a handful of separated marketplaces, rather than a worldwide trading solution. The same token will often be trading at different prices, depending on the exchange.

Unlike their centralized counterparts, decentralized trading platforms such as Kyber Network are almost immune to a cyber attack – no single person or government is in control of the network. Additionally, because you don’t store tokens on the exchange, you remain entirely in control of the funds.

We designed and built KyberNetwork, an on-chain protocol which allows instant exchange and conversion of digital assets (e.g. crypto tokens) and cryptocurrencies (e.g. Ether, Bitcoin, ZCash) with high liquidity. KyberNetwork will be the first system that implements several ideal operating properties of an exchange including trustless, decentralized execution, instant trade, and high liquidity.

One of Kyber’s most compelling features is the ability to transact on the network instantaneously – no registration or deposits are required. In today’s fast-paced society, this is crucial for widespread adoption.

Kyber Network also allows for proxy payments – users can pay anyone in any token. The network converts the payment and forwards it to the recipient as if it came from the original sender. Kyber’s payment API makes it easy for merchants to set up proxy payments. Users can pay with any ERC20 token, and the merchant will receive the payment in Ether.

The ability to trade any currency on the network is revolutionary. For example, imagine the typical ICO that only accepts Ether. With Kyber, you can now send any ERC20 token, such as Augur, to the ICO. The Kyber network automatically converts that ERC20 token to Ether and the ICO will accept it.

Other decentralized exchanges, such as the 0x protocol, have tried solving this problem by handling the matchmaking offline via intermediary parties. This system requires users to trust the intermediary.

Instead of using an intermediary party or an order book, Kyber uses an on-chain system of reserves that bring liquidity to the exchange. As a result, transactions are trustless and instantaneous.

The Dynamic Reserve Pool makes use of a few different roles that you should understand: 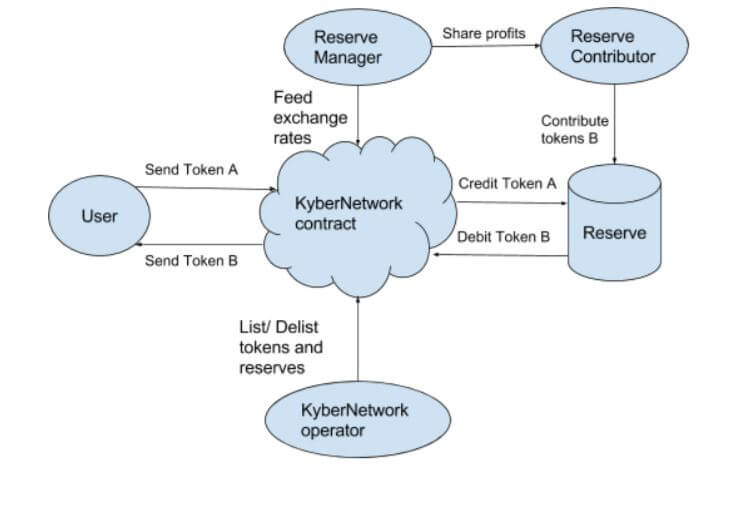 Kyber will operate its own Reserve Entity, separate from third-party reserves – this guarantees the liquidity of the network’s supported tokens.

The group of reserve entities in the network forms the Dynamic Reserve Pool. Having more than one reserve entity in the pool prevents monopolization and encourages market competition. When a user initiates an exchange, the network selects the Reserve Entity with the best exchange rate.

A maximum amount of 226,000,000 Kyber Network Crystals (KNC) will be minted. The token distribution is below:

19.47% of distributed tokens will go to Founders, Advisors, and Seed Investors. Those tokens will be used according to this chart:

Reserves must be pre-purchased with Kyber Network’s Crystals (KNC). They are required to pay a small fee in KNC for every trade they facilitate. These fees are paid to the network in return for the profits earned from trading on Kyber Network.

KNC is burned after reserves pay for fees – as the circulating supply of KNC diminishes, the value of each token should increase.

On February 11th, 2018, the Kyber Network mainnet launch was announced on their blog. The launch marked a significant milestone for the project – no longer will the Kyber Network be trading on the ETH testnet. Instead, transactions will now take place on the Ethereum mainnet.

At first, only the original ICO contributors will have access to ensure stability. However, as time goes on, more users will be admitted to the network.

The tokens initially supported on the mainnet include:

The mainnet launch is a monumental step forward for Kyber Network.

Kyber’s development team has laid out their plans for the token going forward:

The product roadmap is well-defined in its milestones and target dates. Although cross-chain trading is still a year or so away, it will be worth the wait.

Loi Luu is the CEO & Co-Founder of Kyber Network. He is a firm believer in Ethereum and blockchain technology. Luu developed Oyente, the first open-source security tool for Ethereum based smart contracts.

In his bio, Luu states that:

Yaron Velner is the CTO and Co-Founder of the project, receiving his Ph.D. in Computer Science from Tel Aviv University in Israel.

Velner is one of the top global contributors to the Ethereum Bug Bounty Program. He has over ten years of experience as a senior software engineer and as a technical leader at EZchip semi-conductors.

Vitalik Buterin, the inventor of Ethereum, is an official advisor of the Kyber project. Buterin is one of the most influential and prominent figures in the crypto space. Buterin is the founder of Ethereum and Bitcoin Magazine.

Buterin is an official adviser for just two cryptocurrencies – Kyber Network and OmiseGo.

His interest in the project is reassuring for many cryptocurrency investors.

Kyber has a community on Reddit with more than 5,700 readers. The team also has a BitcoinTalk thread, a Slack channel, and a fascinating development blog.

Where to Buy Kyber

Kyber Network is not the only decentralized exchange project, but it certainly stands out from the rest. Instantaneous transactions, liquidity, and proxy payments are all unique features of Kyber Network.

These compelling attributes are made possible through the use of Kyber’s Dynamic Reserve Pools.

Kyber brings liquidity to the market and executes via smart contracts on the Ethereum blockchain. The Reserve Pools also prevent monopolies and encourage competitive exchange rates.

Convincing users to switch to the Kyber Network who’ve already grown accustomed to centralized exchanges may be a problem for them. However, the future of the project looks solid – when cross-chain transactions are supported in early 2019, the network will welcome many new users.

In conclusion, decentralization is the next step for cryptocurrency exchange. Many projects are competing for widespread adoption, but few offer the benefits that Kyber brings to the table.

On-chain metrics reveal that demand for Kyber Network is surging expotentially amid a major protocol upgrade that will occur later this year.

Kyber Network has seen its price skyrocket over 200 percent in the past month following a series of announcements that have proven the strength of this project.