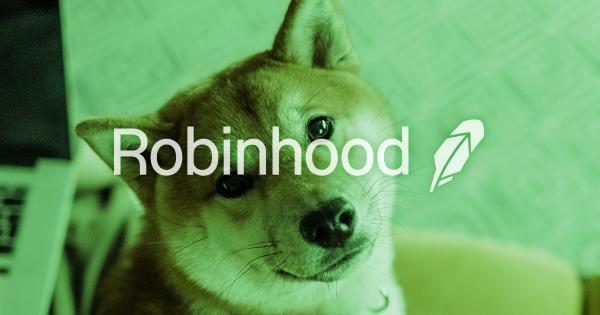 Crypto transactions accounted for more than 41% of Robinhood’s total revenue in the second quarter, compared to 17% for the first three months of 2021, revealed the investing platform’s first earnings report since its recent stock market debut.

Crypto accounted for $233 million, roughly 51%, of Robinhood’s $451 million transaction-based revenue that increased 141% in the second quarter of 2021.

While the interest in cryptocurrencies grew, with over 60% of Robinhood’s net cumulative funded accounts trading in crypto during the second quarter, the popular commission-free investing platform recorded that its monthly active users more than doubled, compared to the same period last year.

“We’re encouraged by the number of people who are accessing the financial system for the first time through Robinhood,” said Vlad Tenev, CEO and Co-Founder of Robinhood in a press release, adding that crypto trading “saw strong growth this quarter among women investors in particular.”

In addition, Robinhood reported that Dogecoin (DOGE) transactions accounted for a substantial portion of the recent growth in the net revenues earned from crypto.

“While we currently support a portfolio of seven cryptocurrencies for trading, for the

Such dominance could turn out to be detrimental for Robinhood, if the hype surrounding the popular meme token, which is morphing into something quite serious, eases.

According to the report, Robinhood’s business could be adversely affected “if the markets for Dogecoin deteriorate or if the price of Dogecoin declines, including as a result of factors such as negative perceptions of Dogecoin or the increased availability of Dogecoin on other cryptocurrency trading platforms.”

The company said that the three months ended June 30 marked the first quarter for Robinhood where a larger share of new users placed their first trade in crypto rather than equities.

Robinhood launched its Initial Public Offering (IPO) Access product in May this year, granting customers access to invest in companies at their IPO price.

“For the three months ended September 30, 2021, we expect seasonal headwinds and lower trading activity across the industry to result in lower revenues and considerably fewer new funded accounts than in the prior quarter,” Robinhood ended the report cautiously, predicting a market slowdown.

Dogecoin accounts for over a third of Robinhood's cryptocurrency trading revenue.

Claiming that he doesn’t pump anything other than Dallas Mavericks merch, the billionaire investor broke down his main reasons for promoting Dogecoin.