Dogecoin accounts for over a third of Robinhood's cryptocurrency trading revenue. 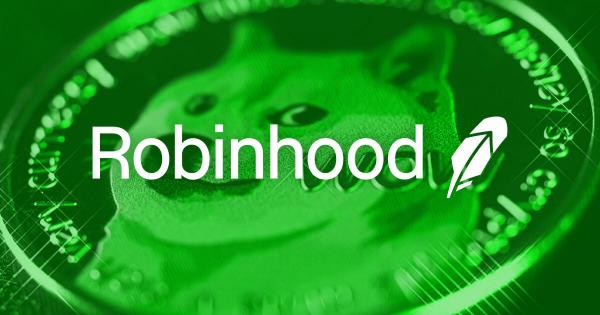 With a YTD peak of almost +15,000%, the performance of DOGE has shocked many analysts. However, considering that this seems mainly driven by sentiment rather than fundamentals, some believe it’s only downhill for Dogecoin from here.

In Q1, 34% of Robinhood's crypto revenue came from Dogecoin.

That was before it really popped off.

If so, this could spell trouble for Robinhood as it attempts to go public.

Dogecoin makes up a significant part of Robinhood’s revenue

Robinhood Markets, Inc. has filed its Form S1 Registration Statement with the Securities and Exchange Commission (SEC) in connection with going public.

Figures for Q1 2021 show a massive surge in revenue, coming in at $522 million versus $128 million for the same period in the prior year.

Under risks, the form identified a significant proportion of its revenue comes from Dogecoin trading. The statement says that its operations could be “adversely affected” if demand for Dogecoin transactions declines.

Robinhood said Dogecoin trading accounts for 34% of its cryptocurrency trading revenue in Q1 2021. Whereas it only accounted for 4% in Q4 2020.

everything is so dumb pic.twitter.com/WcZkk1C5Xj

SEC has concerns with gamification

Robinhood caught on during the start of lockdown when younger, arguably less experienced, people turned to trade.

Its monthly active users have more than doubled since the last year, with 17.7 million as of Q1 2021, up from 8.6 million in the same period last year.

The rising popularity of Robinhood was noted by authorities who took exception to the platform’s “gamification” of trading.

“Many of these features encourage investors to trade more,” Gensler added, “Some academic studies suggest more active trading or even day trading results in lower returns for the average trader.”

In relation to this, Robinhood commented that it intends to make “significant changes to our business model.”