The winner of this year’s Ethereum hackathon, Sheetcoin, is a bold project that turned Google Sheets into an Ethereum wallet, enabling users to send ERC20 tokens to any Gmail address directly from their browser. 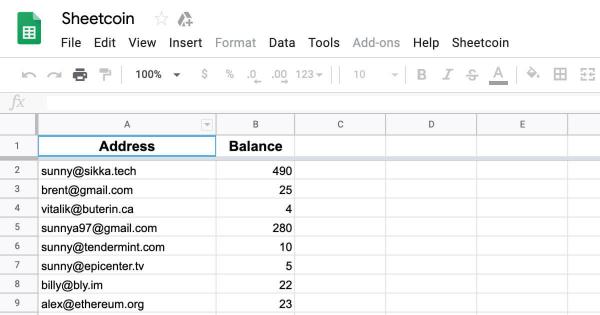 The winner of this year’s Ethereum hackathon, Sheetcoin, is a bold project that turned Google Sheets into an Ethereum wallet, enabling users to send ERC20 tokens to any Gmail address directly from their browser. The project, which is essentially a Google Sheets sidechain, secures the transactions with OAuth.

Despite recent controversy over its lack of scalability and a struggling price, Ethereum is still one of the most popular blockchain projects in the world. That is why Ethereum hackathons attract thousands of developers each year, all of them competing to launch the most innovative project on the network.

Humorously called Sheetcoin, the hackathon winner is based on an ambitious idea—turning Google Sheets into an Ethereum wallet. Developers behind Sheetcoin built a Google Sheets sidechain on Ethereum, enabling users to send ERC20 tokens to any Gmail address.

What makes this project special is the fact that the recipient of the tokens doesn’t need to have a crypto wallet. Instead, all recipients need is a Google account. Received tokens can then be withdrawn to any cryptocurrency wallets, Sheetcoin is “fully connected” to Ethereum.

According to The Defiant, the transactions through Sheetcoin use OAuth, a security standard used to grant access to information without revealing private data such as passwords.

Sheetcoin wasn’t the only project that had a strong focus on security. While most hackathon entries were developing DeFi projects, several finalists were building security and privacy-focused applications.

One of the top five projects on the hackathon, Eth P2P VOIP, used the Ethereum network to increase phone call security. The project prevents spam calls, SIM swapping, and data gathering by allowing users to call an Ethereum address.

DeFi Custody Wallet, another highly rated hackathon entry, is a smart contract that introduced a “dead man switch.” The mechanism sends all of the funds in a wallet to a predetermined address if the wallet isn’t used for a predetermined amount of time.

While none of these projects introduced an idea that has never been heard before, all of them offered practical solutions to some of the most persistent problems the crypto industry faces.