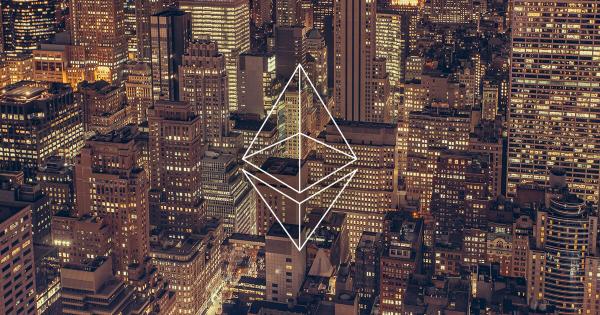 In May, the Ethereum price was hovering at around $260, nearly 40 percent higher than its current price of $186.

Is developer activity an indicator of the future price?

Previously, Ivey Business School professor JP Vergne found in a study that the best predictor of the short term price trend of a cryptocurrency is developer activity. He said:

“We found that the best predictor of a cryptocurrency’s exchange rate is the amount of developer activity around it.”

The developer activity on the Ethereum network is likely on the rise in anticipation of the launch of Ethereum 2.0, and reports indicate that major corporations are paying attention to the said launch, as it would allow the blockchain to process information more efficiently.

In an interview with Decrypt, EY’s global blockchain head Paul Brody said that the firm is processing more than 10,000 transactions on Ethereum for Microsoft, and larger capacity would allow firms to better utilize Ethereum to settle data.

An analyst, who operates with the alias Cactus, said:

“ETH development activity has been going parabolic the past three weeks, early 2020 we are going to be seeing some major announcements from the ethereum team… It will take other blockchains years to catch up in terms of development.”

State of the DApps, an analytics firm that evaluates the usage of decentralized applications, reported that the release of new DApps per month has increased to nearly 1,500.

As the scalability of the Ethereum network improves, DApps and other blockchain networks operating on top of Ethereum will benefit from expanded capacity, creating a more practical environment for decentralized platforms to operate in.

With technical analysts generally gearing towards a deeper pullback for the cryptocurrency market following the drop of the bitcoin price below $9,000 earlier this week, the Ethereum price is expected to stall, possibly to the year’s end.

As reported by CryptoSlate, November has historically been a strong month for both Bitcoin and other major alternative cryptocurrencies, but as seen in 2018, significant sell-pressure could prevent rapid recovery.

“Alts are directly correlated to Bitcoin. If price goes south, diversifying into alts will only make things worse If you want hedge, learn how to use futures or options to your advantage Diversification in crypto is not strategy – majority of portfolio should be BTC.”

In recent months, bitcoin has become more volatile than Ethereum and other alternative cryptocurrencies, which may indicate that a large price move could occur in the short term.

Skew, a London-based data provider for Bitcoin and Ether derivatives, recently raised the question that most investors in the industry have been asking themselves for a while: “has Ether bottomed relative to Bitcoin?” Even though the founder of the Crypto Cast Network, Vortex, did not hesitate to respond that Ethereum looked “pretty dead” to him, […]