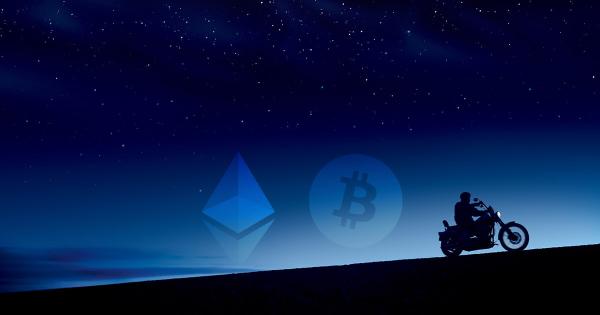 Since the end of the 2017 bull market during which the Bitcoin price achieved $20,000, most cryptocurrencies have fallen by 80 to 95 percent against the U.S. dollar.

The high level of correlation between Bitcoin and Ethereum indicates that most major cryptocurrencies have been following the price trend of the dominant cryptocurrency.

Why is it a sign of a bearish trend for bitcoin, Ethereum, and crypto in general?

In amidst a bull market or an extended rally, cryptocurrencies tend to see independent movements to either the upside or the downside.

Early on in 2017, for instance, the correlation between Bitcoin and Ethereum was hovering in the range between -50 percent and 50 percent, as both cryptocurrencies moved purely based on the demand from their respective markets.

Depending on the interpretation of various data, it is arguable whether the cryptocurrency market is currently in a bear market or a bull market.

In terms of price, Bitcoin is up by more than two-fold since January 2019 and Ethereum has also recovered relatively well, which some may consider being a bull market.

Despite the sluggish trend of cryptocurrencies, the fundamentals for both bitcoin and Ethereum seem to be strengthening.

The hash rate of bitcoin is still near record highs with six months to go for the block reward halving in mid-2020 and the user activity of Ethereum is on the rise due to various factors including rising decentralized finance (DeFi) activity and the usage of stablecoin Tether.

As reported by CryptoSlate, the volume of newly emerging strictly-regulated platforms targeting accredited investors such as Bakkt has also begun to see a large increase, indicating rising demand for cryptocurrencies from a broader base of investors.

Technical analysts generally favor a deeper pullback in the short term but over the medium to long term, optimism continues to surround the cryptocurrency market.

In an early-morning tweet on October 29th, Tether announced that it would be performing a 300 million USDT chain swap.