Vitalik Buterin laid out his thoughts on why scaling Dogecoin (or other blockchains) isn't child's play. 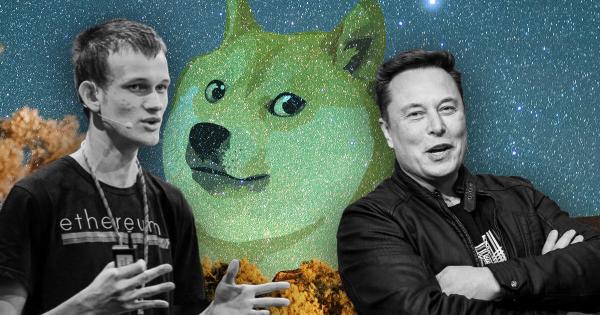 To enhance Dogecoin fundamentals, Elon Musk recently proposed increasing the block size of the controversial meme token. The Tesla boss believes doing so can improve speed and scaling to make it a real contender in the world of cryptocurrency.

However, Ethereum Co-founder Vitalik Buterin picked apart the idea in a blog post by saying there are drawbacks and limits to what can be achieved with this proposal.

Dogecoin trying to run with the big dogs

Buterin posted his thoughts on blockchain scaling with a view to Musk’s comments. The Ethereum boss points out that speeding up block times, increase the block size, and fee reductions all come at a cost to decentralization while compromising the fundamental properties of blockchain as a concept.

What’s more, Buterin said the matter is made all the more tricky without technologies such as ZK-SNARKs or sharding, which Musk did not mention.

ZK-SNARKs, or Zero-Knowledge Succinct Non-Interactive Argument of Knowledge, refers to a proof construct that can verify possession of certain information, such as a private key. It does this without revealing that information and without any interaction between the prover and verifier.

Sharding is a way to split and store data across multiple databases. This allows a database cluster to scale as data and traffic increase.

Buterin’s main criticism of the proposal is that increasing block size would make it difficult for Dogecoin holders to run full nodes. He says that a critical component of defending against malicious attacks is a culture of users validating the blockchain.

Under circumstances where just a handful of node runners verify the network, malicious actors have more scope to attack.

” If you have a community where everyone runs a node, the attacker loses. We don’t know what the exact threshold is at which herd immunity against coordinated attacks kicks in, but there is one thing that’s absolutely clear: more nodes good, fewer nodes bad, and we definitely need more than a few dozen or few hundred.”

According to Buterin, the answer to this is to maximize the number of users who can run a full node. This means ensuring node operation is possible on regular consumer hardware.

Musk’s FUD tweets on the environmental damage caused by Bitcoin were a factor in the recent crypto crash. While many hailed the $1.5 billion Bitcoin buy in February as a turning point for mainstream acceptance and adoption, all of this came undone on Musk’s apparent U-turn.

Many are blaming Musk for his part in the crypto crash, which saw a 48% loss in the total market cap.

His intentions with Dogecoin are not 100% transparent at this point. At face value, he looks to be lifting DOGE out of its joke status. Even tweeting about working with devs to make this happen.

But, in a now-deleted tweet, Dogecoin Co-founder Jackson Palmer called Musk “a self-absorbed grifter,” and disputed that he’s working with devs.

Updated: Earlier version of the story incorrectly said the name Dogecoin founder who called out Elon Musk was Billy Markus, when it was in fact Jackson Palmer.