Such hype, much down. 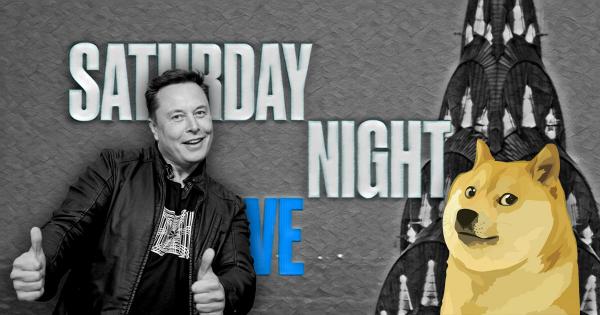 Tesla CEO Elon Musk took to the popular Saturday Night Live (SNL) show a few hours ago as millions of viewers expected him to comment on Dogecoin, the world’s fifth-largest cryptocurrency. DOGE prices, however, dropped by 25%.

For the uninitiated, SNL, an American late-night live television sketch comedy that launched back in 1975, features comedy sketches that are performed by a large and varying cast of repertory and newer cast members.

Each episode is hosted by a celebrity guest, who usually delivers the opening monologue and performs in sketches with the cast, with featured performances by a musical guest.

Musk was announced as show host a few weeks ago, which immediately drew up speculation of him shilling Dogecoin to millions of Americans on live TV.

He has tweeted about the meme cryptocurrency on numerous instances the past few months—stating that SpaceX (his rocket company) would put a ‘doge on the moon’ and that he has even accumulated some tokens for his youngest child.

The show, however, didn’t see as much shilling. “Yeah, it’s a hustle,” commented Musk on Dogecoin as a ‘digital asset’ while taking on the character of a ‘financial advisor’ on the show.

Maye Musk, Musk’s real life mother, joined him on stage and said she was excited about her Mother’s Day gift and hoped that it was not Dogecoin—to which Musk said, “it is.”

Elon Musk told his mom that her Mother's Day gift is Dogecoin ???

The comments didn’t help meet public expectations. Most seemed to expect a rally, but a typical “sell the news” ensued: DOGE fell over 25% shortly after his appearance, with the coin losing over $30 billion in market cap in the past four hours alone.

As such, the coin is still up over 20,000% in the past year and 35% in the past week, meaning those who invested very recently in the coin could have seen losses. But then again, the crowd never wins, does it?