The electric carmaker purchased over 37,000 Bitcoin, filings from today showed. 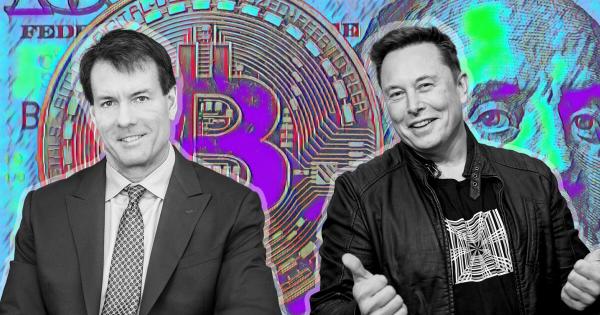 The electric carmaker purchased over 37,000 Bitcoin, filings from today showed. And the firm’s CEO is getting congratulated by an institutional Bitcoin bull.

MicroStrategy CEO Michael Saylor is a happy man. The Bitcoin convert has picked up over a billion dollars worth of the asset last year, majorly through his company’s treasury and a minor portion for personal accounts.

He’s been preaching the Bitcoin cause strongly in the past week. Saylor considers it to be the ultimate hedge against global inflation, a bleak economy, and falling yields across traditional asset classes such as bonds and equities.

Today, Saylor extended his regards to Elon Musk, minutes after the latter almost broke the internet today after a recent development amidst relentless tweeting of meme coin Dogecoin in the past week.

As CryptoSlate reported this morning, electric carmaker Tesla, the firm chaired by Musk, was found to have purchased over $1.5 billion worth of Bitcoin in the past months, a filing made to the US Securities and Exchange Commission showed.

“We invested an aggregate $1.50 billion in Bitcoin under this policy,” read Tesla’s Form K-10, referring to a policy change that stated Tesla would further diversify and maximize returns on its cash and was not required to maintain “adequate operating liquidity.”

The firm, and Musk, received a welcome of sorts to the Bitcoin side by Saylor. “Congratulations & thank you to Elon Musk & Tesla for adding Bitcoin to their balance sheet.  The entire world will benefit from this leadership,” he tweeted, suggesting the move was a door for many other companies to follow in Tesla’s footsteps.

Congratulations & thank you to @elonmusk & @Tesla on adding #Bitcoin to their balance sheet. The entire world will benefit from this leadership.https://t.co/FVTepBqAI2

As such, the move came on the back of Saylor’s own Bitcoin “playbook,” a set of guidances and conferences designed to help company executives and investors into their first Bitcoin purchase. It includes legal, regulatory, and technical information—It’s the same groundwork that MicroStrategy followed for its own purchase.

Meanwhile, Tesla might just start taking Bitcoin as a payment for its electric vehicles.

“Moreover, we expect to begin accepting Bitcoin as a form of payment for our products in the near future, subject to applicable laws and initially on a limited basis, which we may or may not liquidate upon receipt,” the filing read.

Whoever said Bitcoin would never see the light of the day?