Top cryptocurrencies tumbled down Sunday night by several percent. But traders seem to now be buying. 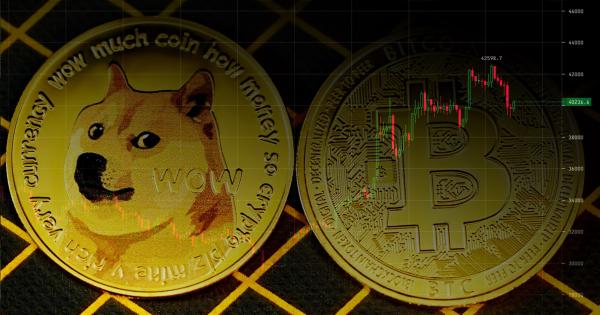 Bitcoin and Dogecoin lost over 5% each Sunday night after a brief sell-off in the crypto markets. They regained most of the losses at press time, but futures traders were left nursing millions of dollars in losses.

BTC fell nearly $2,000 in a few hours—from $41,500 to under $39,200—briefly closing under its 34-period exponential moving average and seeming primed for a continued downtrend. It was, however, aggressively brought up at those levels and regained the $40,000 price level this morning.  But the move saw ensuing sell-offs in other large-cap cryptocurrencies.

Dogecoin fell nearly -6% to $0.201, while Cardano (ADA), XRP, and Chainlink (LINK) dropped a couple of percent each. Ethereum and Binance Coin, on the other hand, remained relatively stable, falling barely over a percent before being bought up.

The ‘spot’ movements were followed by over-leveraged futures traders succumbing to the relatively tame carnage. Data from market tool Bybt showed $400 million were lost to liquidations in the past 24 hours, with Bitcoin traders losing over $178 million of that amount alone.

$122 million were lost in Ethereum trades (despite its relatively stable price), while XRP ($22 million), Polkadot ($6 million), EOS ($4.9 million), and Dogecoin ($4.61 million) followed with their own liquidation figures.

The downward price moves came after reports of regulation involving cryptocurrencies in the US circulated last night. These involve possible taxation of crypto trades and crypto business to increase tax revenue and help fund the new ‘Infrastructure Deal,’ and even bringing the market under further scrutiny from the Internal Revenue Services.

“Lawmakers and regulators are taking cryptocurrency concerns seriously and seem poised to make sustained efforts on multiple fronts to bring it out of the shadows,” an analyst at Beacon Policy Advisors noted last week. “Regulation is coming for the industry,” he added.

Meanwhile, the industry has, however, seen some untoward comments from US officials in the past weekend. “There’s nothing ‘democratic’ or ‘transparent’ about a shady, diffuse network of online funny money. After a decade of experience with these technologies, it seems safe to say that the vast majority haven’t been good for anyone but their creators,” remarked Senator Sherrod Brown, Democrat of Ohio.