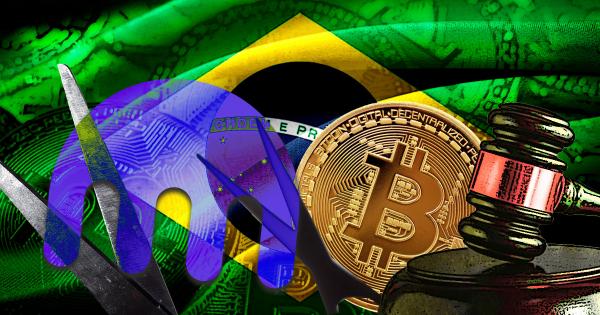 The biggest news in the crypto-verse for Nov. 30 includes Kraken laying off 1,100 staff as crypto winter bits hard, Binance expanding to Japan with the acquisition of Sakura Exchange BitCoin (SEBC), Brazil approving a bill to recognize Bitcoin as a payment method, and Animoca Brands launching $2 billion fund to invest in Metaverse.

Kraken to layoff 1,100 people to ‘adapt to current market conditions

The worsening crypto market downturn has forced Kraken to lay off about 1,100 staff representing 30% of its workforce.

The affected staff will receive up to 16 weeks of separation pay and assistance to find new work opportunities.

On-chain data from Santiment shows that shortly before the Ethereum Merge, wallets holding between 100 and 100,000 ETH reached a 20-month high. The accumulation pattern of the whales and sharks also increased following the FTX fallout.

As of Nov. 28, the number of active addresses on Ethereum reached the highest level in more than six weeks of 500,000 active addresses, pushing the price up by 11% in the last seven days.

Brazilian lawmakers have moved to pass a cryptocurrency bill recognizing Bitcoin as a payment method in the Latin American country.

Following the approval by the lawmakers, the bill was sent to the presidency for final approval and implementation.

Earlier on Nov. 29, crypto journalist Tiffany Fong released her interview with Sam Bankman-Fried (SBF), where the former FTX CEO commented on his donations to U.S. politicians.

SBF confirmed that he donated to the Democratic and Republican parties. However, he kept the Republican donations in the “dark” to avoid potential backlash from pro-democratic media outlets.

Binance has completed the acquisition of Japan-based Sakura Exchange BitCoin (SEBC). The 100% stake in SEBC will allow the leading crypto exchange to fully operate a regulated crypto exchange in the East Asia region.

The acquisition will help Binance strengthen its place as the most significant exchange by trading volume. Data from the Block indicates that Binance makes up 75% of all exchange trading volume, while other exchanges like Coinbase, KuCoin, and Kraken control less than 10% of the trading volume.

Animoca to launch a $2B investment fund for the metaverse

Venture capital firm Animoca Brands has announced plans to establish the Animoca Capital fund, which will raise up to $2 billion to invest in metaverse businesses.

Animoca CEO Yat Siu added that the funds will prioritize “everything on digital property rights” and will be open to early-stage startups looking to build in the Web3 ecosystem.

Telegram founder Pavel Durov has revealed plans to build a decentralized exchange (DEX) and a non-custodial wallet in the coming months.

Durov added that he was looking to bootstrap the decentralized auction platform  Fragment. The crypto username marketplace has sold about $50 million worth of usernames in the past five weeks.

SilverGate CEO says, “This type of volatility is not new to us,” as the crypto market continues to struggle.

SilverGate CEO Alan Lane told CNBC that the current financial downturn has deeply affected financial markets, including Bitcoin. However, the volatility is not new to his company, as it was built to thrive through the bull and bear markets.

As of Sept. 30, Silvergate reportedly held about $13 billion in its reserve, which is used to serve its customers through the market downturn.

As a result, Bitcoin is considered to outperform the Fed’s monetary instruments, as its inflation rate remains predictable and cannot be adjusted.

Uniswap users can now buy, sell and swap NFTs directly on the decentralized exchange platform. It will list the first set of NFTs from OpenSea, X2Y2, Sudoswap, and LookRare.

Uniswap added that it would airdrop $5 million and offer a gas rebate to the first 22,000 NFT buyers.

LedgerX to transfer $175M to FTX

A subsidiary of FTX, LedgerX is set to transfer about $175 million to help FTX through its bankruptcy process, Bloomberg reported.

The funds will be drawn from a $250 million fund LedgerX had planned to register for its U.S. derivatives offerings before the FTX empire fell.

A malicious actor had attempted to extort some $450,000 from Coinbase. Additionally, he claimed to have retrieved sensitive data of 306 million Coinbase users and threatened to release them to the public via Coindesk.

However, Coinbase’s security team said the claims were false as the hacker had no access to Coinbase’s database.

END_OF_DOCUMENT_TOKEN_TO_BE_REPLACED

ICON is an interconnecting blockchain network.

END_OF_DOCUMENT_TOKEN_TO_BE_REPLACED

Kyber Network is a hub of liquidity protocols that aggregates liquidity from various sources to provide secure and instant transactions on any decentralized application (DApp).

END_OF_DOCUMENT_TOKEN_TO_BE_REPLACED

Hashflow is a decentralized exchange designed for interoperability, zero slippage, and MEV-protected trades.

END_OF_DOCUMENT_TOKEN_TO_BE_REPLACED

Celo describes itself as an open platform that makes financial tools accessible to anyone with a mobile phone.