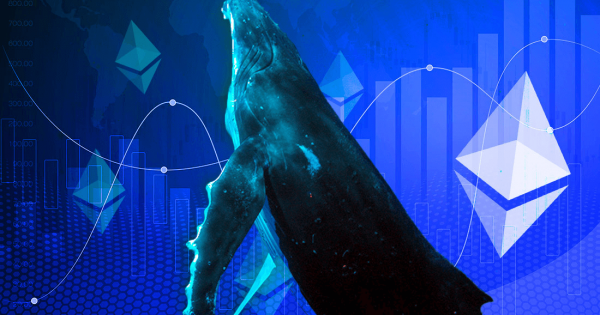 Ethereum whales and sharks have been accumulating Ether (ETH) at a record rate since the FTX crash, Santiment reported on Nov. 30.

🐳🦈 #Ethereum's large key addresses have been growing in number since the #FTX debacle in early November. Pictured are the key moments where shark & whale addresses have accumulated & dumped. The number of 100 to 100k $ETH addresses is at a 20-month high. https://t.co/beawFcBRvi pic.twitter.com/dR8zEqurZQ

The market intelligence platform revealed that wallets holding between 100 and 100,000 ETH had reached a 20-month high. A Nov. 23 tweet from the firm said the last time these wallets accumulated this aggressively; ETH rallied by up to 50%.

🐳🦈 #Ethereum's active shark & whale addresses continue accumulating with prices less than a quarter of their #AllTimeHigh levels a year ago. In Oct/Nov 2020, these 100 to 100k $ETH addresses assisted in pushing $ETH to a +50% price rise over 5 weeks. https://t.co/v8gh4RfV7z pic.twitter.com/Oe3lTo12uj

CryptoSlate, using Glassnode data, confirmed that ETH addresses holding above 1000ETH had seen an uptick in their accumulation.

Santiment highlighted the accumulation pattern leading to Ethereum Merge. According to the chart, Ethereum whales and sharks acquired more ETH in the weeks preceding the Merge, which pushed the asset’s value up but dumped immediately after the Merge.

The blockchain analytics firm noted that the addresses dumped between October and November when there was a slight rebound in ETH price versus BTC.

However, ETH whales and sharks began accumulating again immediately after the FTX implosion as the value of most digital currency crashed.

According to the charts below, ETH addresses with a non-zero balance and addresses holding up to 1 ETH have all reached a new all-time high

Meanwhile, the number of active addresses on Ethereum also reached the highest level in more than six weeks on November 28.

📈 #Ethereum's active addresses surged to its highest level in over 6 weeks yesterday, and that likely factored into today's price growth. On October 15th, the last time addresses spiked at this level, the price of $ETH jumped +30% over the next 3 weeks. https://t.co/8LFsUn6Thz pic.twitter.com/hDekw9Em51

Santiment wrote that the last time ETH active addresses reached this level was on October 15, when Ether’s price jumped by over 30% in the following three weeks.

The recent spate of ETH accumulation has positively affected its price. The asset is up over 4% in the last 24 hours to $1,265, according to CryptoSlate data.

The second-largest digital asset by market cap has increased by over 11% in the last seven days.