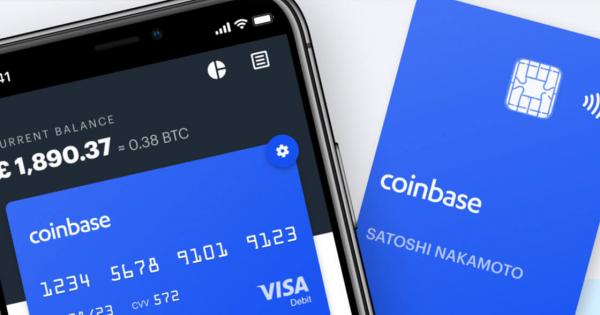 Coinbase announced the expansion of its crypto Visa debit card service to six new countries across Europe. The expansion follows the card’s April debut in the U.K. and should see a rollout to more countries in the coming months.

Six more countries in the E.U. get access to Coinbase Card

The leading cryptocurrency exchange in the U.S., Coinbase, will see its Visa debit card service expand to six more European countries this month. According to the company’s official blog post, the Coinbase card will now be available to customers in Spain, Germany, France, Italy, Ireland, and the Netherlands.

Coinbase’s Visa debit card debuted in the U.K. in April this year after securing an e-money license in the country. After the launch, Zeeshan Feroz, the CEO of Coinbase U.K., told CNBC that the company was applying for a European e-money license and that it was hoping to expand to other European countries in the months that followed.

The Coinbase Card will be available in the 6 European countries as of June 12, the company said, with its CEO adding that it has seen “extremely strong take-up” since its U.K. launch.

While there is currently no official information on how many Coinbase Cards were issued in the past two months, Feroz said that the company “blew past” the initial 1,000 cards it offered users for free.

He also said that Coinbase plans on expanding the card into other markets as well, but is still searching for the right banking partners.

Users of the Coinbase Card are able to make fast, contactless payments everywhere where Visa cards are accepted. After syncing with Coinbase’s mobile app, users can select which cryptocurrency in their wallet they want to spend and switch seamlessly between Bitcoin (BTC), Bitcoin Cash (BCH), Ethereum (ETH), Ethereum Classic (ETC), Litecoin (LTC), and other ERC-20 tokens.

DAI is the first stablecoin listed on Coinbase Earn