The Bancor Network announced the launch of a new generation crypto exchange service.

The Bancor Network announced the launch of a new generation crypto exchange service. The new service acts as a fundamental disruptor to the existing exchange paradigm that requires depositing funds on a centralized exchange, or order matching on a decentralized exchange.

In a post on the official Bancor Twitter account on Nov. 5, Bancor revealed that the new service called BancorX will enable seamless conversion within over 110 ERC-20 and EOS-based cryptocurrencies.

We are thrilled to announce that our Cross-Blockchain Decentralized Liquidity Network, #BancorX, has officially been pushed live — enabling automated token conversions between 110+ ERC20 and EOS-based tokens. https://t.co/E54nlUElmG pic.twitter.com/NSocQZr11A

The functionality of BancorX is based on the ability of BNT (Bancor Network Token) to function concurrently across both EOS and Ethereum blockchains, which enables seamless cross-chain transactions. To make this possible, BNT automatically issues and destroys itself simultaneously across different blockchains, which means that a BNT that moves from Ethereum to EOS, for example, is removed from circulation on Ethereum and added to circulation on EOS – thereby keeping the token’s supply constant.

If for instance, a user converts an ERC-20 token in a crypto asset based on the EOS blockchain using BancorX, the ERC-20 token is immediately converted into BNT, which is then sent to the BNT smart contract on the Ethereum blockchain. The smart contract receives information for the destination blockchain (in this case EOS), and the BNT is completely removed from circulation on Ethereum.

The BancorX EOS smart contract then issues a corresponding amount of BNT on the EOS chain, and this BNT amount can be converted into EOS or any EOS-based cryptoasset using Relays on the Bancor Network. If a user is converting from an EOS token to an Ethereum token, the same process repeats itself in reverse.

According to Bancor, a fail-safe has been included in the exchange framework, with a transfer quote built into BancorX smart contracts which assign a maximum amount of BNT that can be transferred across chains at any time. This quote is then periodically reset with each new block produced as it is depleted by transfers, ensuring that the system continues to work smoothly.

An excerpt from the announcement post on Bancor’s blog reads:

“As BancorX goes live and the first BNTs flow from ETH to EOS and back again, Bancor will aim to remove friction, unify the user experience and ensure the system’s continued decentralization and utility. With real blockchain interoperability, the possibilities for token-powered applications proliferate dramatically. We are thrilled to introduce this new tool — and to see what you do with it.” 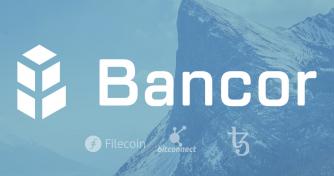 The Biggest ICOs of All Time & What Sets Bancor Apart