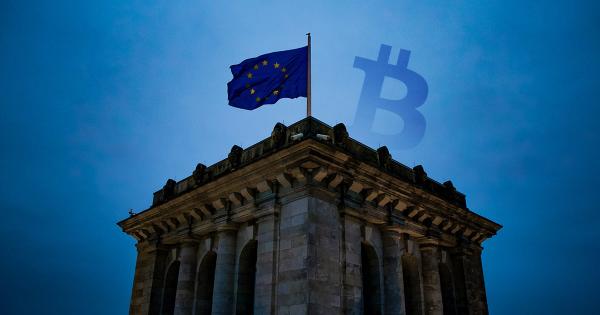 Photo by Christian Lue on Unsplash

Bitcoin investors should be celebrating analyses that indicate the European Union is starting to fall apart then, right? Yes and no.

An analyst fears that the value of BTC may immediately plunge off a cliff if the supranational entity falls apart, but he did opine that such a macroeconomic event could dramatically boost Bitcoin in the long run.

When you think of global superpowers, three likely come to mind: the U.S., China, and the European Union, the union consisting of most of the leading economies in Europe.

As surprising as it may seem, fears are growing that the E.U. is about to collapse, making “Brexit” potentially just the start of a trend getting worse day by day.

Tuomas Malinen, chief executive of GnS Economics and a professor in Helsinki, explained in a potent Twitter thread published May 12 that the “breakup of the Eurozone is a near certainty.”

The long and short of the 20-part thread is two things, as the economist concluded:

Malinen isn’t the only prominent market analyst expecting an imminent collapse of the European Union.

Raoul Pal — CEO of Real Vision and a former executive at Goldman Sachs — echoed this sentiment in a May 11 video update published to Real Vision, in which he called the E.U. a political “experiment.”

He said that with certain member nations of the E.U. becoming more nationalistic while the economic outlooks of certain states like Italy and Greece worsen, the very nature of the union is collapsing.

The Wall Street veteran added that with European governments and central banks poised to tack on ~25 percent to their respective balance sheets, there are serious political and economic outcomes ahead that will send the euro falling and may dissolve the Eurozone.

Bitcoin could crash in the wake of this event

According to Travis Kling — CIO of Ikigai Asset Management and an ex-Point72 portfolio manager, the E.U. as we know it dissolving would have an immediate disastrous effect on Bitcoin.

“If the Euro looks like its collapsing, that’s probably a BTC crash (global massive risk-off),” he explained.

Indeed, after the collapse of the European Union, some member nations may struggle with intense fiscal and monetary difficulties as the abrupt transition to sovereignty takes place.

This is likely to disrupt supply chains and send equities crashing, pushing Bitcoin — which has a positive correlation with the S&P 500 during periods of economic “stress” — lower as a rush to liquidity takes place.

Then, it could benefit Bitcoin… and benefit it a lot

Instead, following the panic of the crash, the prominent investor expects the price of Bitcoin to go up at a rapid clip, as the economic and monetary fallout of a fractured Europe forces investors to seek investments in hard money. Kling put it best when he said:

“When people talk about ‘hyper-Bitcoinization’, I’ve always felt like a collapse in the EUR was the most likely and quickest path to get there,” referencing the belief by Bitcoiners that the macroeconomic environment will eventually reach a point where BTC absorbs fiat currencies.

Just to be clear, when people talk about “hyper-Bitcoinization”, I’ve always felt like a collapse in the EUR was the most likely and quickest path to get there.