In a first for the cryptocurrency market, a community-consensus for Ripple last week approved an amendment to the XRP ledger, allowing users to delete existing wallets. 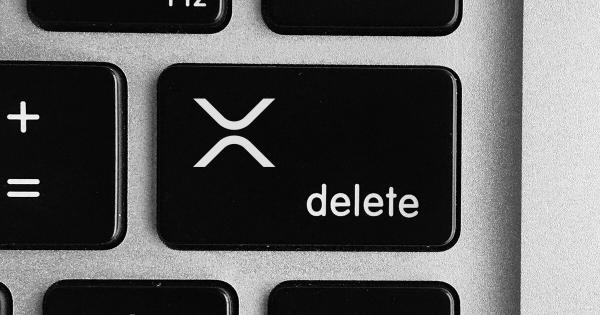 In a first for the cryptocurrency market, a community-consensus for Ripple last week approved an amendment to the XRP ledger, allowing users to delete existing wallets.

Voted over two weeks with an 80 percent majority, the “ DeletableAccounts Amendment” allows XRP wallet users to remove old, inactive accounts while recovering “reserve” funds. The update helps upkeep of a cleaner ledger and avoids the maintenance of inactive wallets.

After the amendment, some XRP users successfully deleted their then-existing wallets. Accounts found here and here prove the fact.

Ripple engineer Nik Bougalis proposed the amendment in October 2019, listing the pros and cons of such a move. At the time, Major concerns included deleting accounts in the midst of existing obligations and account “abuse” by mass deletion.

To delete an account, certain prerequisites need to be met. Only verified owners of a wallet hold the right to delete accounts, by requiring a transaction to be processed from said wallet prior to deletion. Other requirements include owning less than 1000 objects in a ledger and not having one’s account linked to certain, defined ledger objects.

The transaction history of deleted accounts will continue to exist on full-history servers. This prevents nefarious behavior and the ability to mask illicit activity. However, the data will not be accessible on servers that maintain recent blockchain activity, treating deleted accounts like one that never existed.

Accounts can be deleted at a nominal cost of 5 XRP, or $0.90 cents as per price data on CryptoSlate. After the amendment, the “sequence” number for new wallets will also be changed to match the updated ledger index, instead of starting at “1.”

“The change protects accounts from having their old transactions replayed if the account gets deleted and then re-created.”

Deleted accounts can still be retrieved. For a transfer of 20 XRP, or $3.60, accounts can be re-funded and recovered. However, past transactions or settings are not retrieved, meaning the recovery is simply a “refresh” of old accounts.

The update provides XRP users with a much-requested feature for cryptocurrency markets. Meanwhile, the amendments page shows several projects either under development or ongoing proposals, although none as major as the deletion update.

UAE Exchange, one of the leading global money transfer and exchange solutions, plans to implement RippleNet into its service by Q1 of 2019. 4 min read