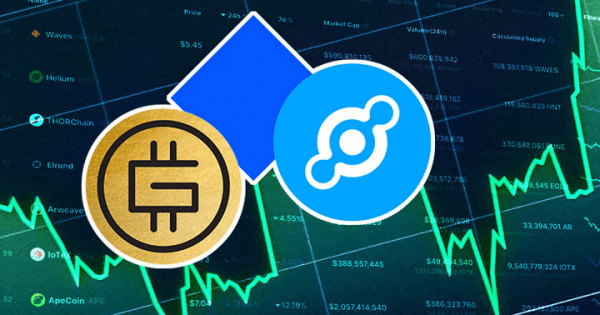 Since May 28, inflows have steadily lifted the total market cap, with a sharp increase in the early hours of May 30, taking the peak to $1.276 trillion, representing a 12% increase from the local bottom on May 12.

Following the Terra UST stablecoin crash this month, crypto markets have been in freefall. During this period, the market cap has been trading between $1.138 and $1.328 trillion, with experts calling recent price action strong evidence of crypto winter.

Nonetheless, bulls have lifted Bitcoin +6%, taking it back above the psychological $30,000 level for the first time since a week ago.

However, Cardano is the biggest top 10 gainer in the last 24-hours, up 12%, closely followed by Solana, up 9% over the same period.

Mid-caps have benefited the most in percentage terms, with Waves posting the biggest increase in the top 100, up 37% over the last 24-hours, followed by move-to-earn project STEPN, up 27%. Helium took the third-highest spot with a 19% increase.

Macro Economist Henrik Zeberg expects crypto markets to build on this relief rally and “soar [in the] coming weeks and months.”

His expectations are for the “Lambo guys and experts,” who have been largely absent during this drawdown, to return in force.

However, macro factors will eventually kick back in, resulting in another crash. Adding that crypto speculation is at the heart of this everything bubble.

Having said that… Crypto is going to soar coming weeks and months. All shitcoins will fly one more time. Lambo guys and experts will be out again🤦‍♂️

Remember -whatever narratives will be this time -Crypto is the very speculation that defines this market bubble pic.twitter.com/GxbNjHTm76

@AurelienOhayon noted instances of 50% drops for Bitcoin since October 2019 have always gone on to post significant rallies.

Similarly, @IamCryptoWolf tweeted that the Bitcoin price is “building a reversal bottom,” despite poor investor sentiment.

“$BTC building a reversal bottom as it did in 2019. Market sentiment worst than ever.”

The Greed and Fear Index is currently at 10 and has been stuck in the extreme fear zone since the Terra ecosystem collapse.