The balance of USDT on exchanges doubled in the past year reaching $17.7 billion, while USDC saw the $7 billion it recorded earlier this year drop to $2.1 billion. 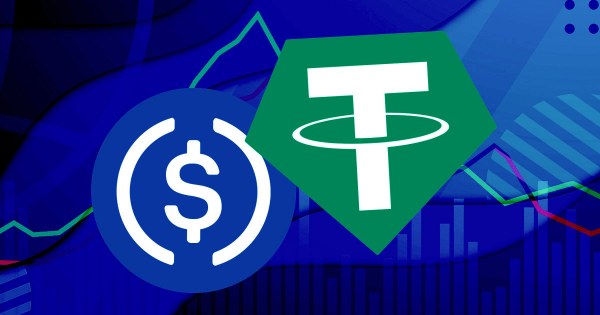 Often an overlooked part of the cryptocurrency market, stablecoins can be used to determine the current state of the market. Stablecoin balance on exchanges represents “dry powder,” or idle liquidity that can become a strong driving force in the market.

The total stablecoin balance on exchanges has only recently become a significant factor in the market. The amount of stablecoins on exchanges remained relatively flat until 2020, with outflows roughly equalling inflows.

However, following the 2020 COVID-19 pandemic, the market saw exponential growth in stablecoin balances on exchanges. According to data from Glassnode analyzed by CryptoSlate, the slight growth of 2020 turned into a parabolic rise at the beginning of 2021.

The two main driving forces behind this growth were USD Coin and USDT.

Circle’s USD Coin stood out among most other stablecoins most likely to take the reign from Tether’s USDT. It reached its peak in February 2022 with over $7 billion USDC sitting on exchanges. It came surprisingly close to USDT and its exchange balance of around $10 billion.

However, USDC failed to maintain its growth. Since February 2022, the stablecoin has seen its balance on exchanges drop continually and is now reaching the level it recorded at the beginning of 2021 — $2.1 billion.

USDC’s diminishing presence on exchanges stands in sharp contrast to USDT. Tether’s stablecoin powerhouse has seen its balance on exchanges double in 2022 and now stands at around $17.7 billion.

The divergence between USDC and USDT balances could become even more significant as the quarter progresses. As previously covered by CryptoSlate, USDC leaving Binance reached its yearly high at the beginning of September. In the first week of September, around $1 billion left Binance’s USDC hot wallets per day.

While this has been in line with the broader industry trend, USDC had topped the charts when it came to outflows. One of the factors that contributed to its massive outflows was Binance’s decision to stop supporting USDC. The exchange said it would convert customers’ holdings in USDC, USDP, and TUSD into its native BUSD stablecoin to enhance liquidity and capital efficiency.

Binance is the largest cryptocurrency exchange by trading volume and the largest exchange by USDC balance. Removing support for USDC landed a heavy blow to the stablecoin.

Another significant factor that further deepened the divergence between USDC and USDT was Tether’s recent commitment to transparency. The company was widely criticized for avoiding auditing its cash reserves and confirming its claims that USDT was backed with fiat currency reserves.

Initiated by Paolo Ardoino, Tether’s CTO, the company has recently ramped up its efforts to present a transparent insight into its reserves, publishing daily values of its fiat currency and gold reserves.