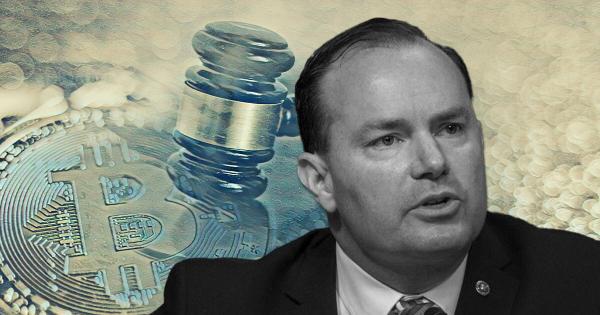 In one of the earliest opposition to the move to adopt the provision of a crypto tax provision in the $1.2 trillion infrastructure bill, United States Senator, Mike Lee, has raised concerns that the move would send more citizens below the poverty benchmark line.

While warning that passing the legislation, which he describes as being unproven, could stifle innovation in the country, he noted that cryptocurrencies, generally, are not regulated like securities. The unregulated nature of crypto would drive away innovation since they do not operate under policies by the government, he explained.

Lee, a lawmaker from Utah, outlined his numerous concerns about crypto, during the Senate session on Saturday.

Even though Lee confirmed that crypto is “an industry that’s rapidly developing within the United States,” he argued that the provision which seeks to require those who buy and sell cryptocurrency to treat it the same way as they would the exchange of securities is problematic because they are very different than securities.

“These aren’t just stocks. It’s something very different. It’s a medium of exchange that, if adopted more widely, could facilitate a lot of economic activities and a lot of innovation within the United States of America,” Lee said.

He also warned that if the bill gets passed, it’s going to have a chilling effect on innovation within this sector because places outside the United States may be the ones to reap the benefit associated with the laws in the country if it adopts an unproven, untested, unknown strategy.