Tether, the largest stablecoin by market capitalization, has issued over $300 million in USDT during the last week. 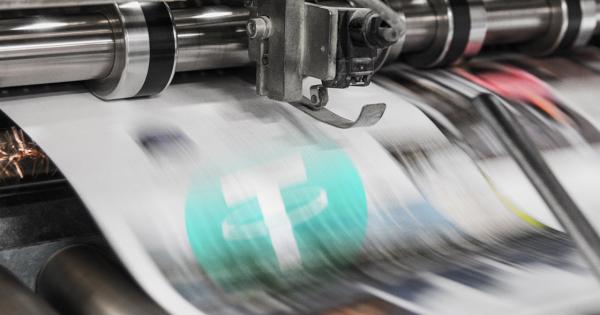 Tether, the largest stablecoin by market capitalization, has issued over $300 million in USDT during the last week. The sudden increase in supply has resulted in accusations that Tether is, once again, engaging in market manipulation and that its stablecoin is still unbacked by dollar reserves.

Tether and closely-connected exchange Bitfinex have been involved in a large amount of controversy. Tether’s USDT underpins billions of dollars of value in the cryptocurrency markets. Consequently, a loss of confidence in the stablecoin could prove disastrous for the price of Bitcoin.

To further exacerbate issues, Tether has refused to undergo audits or clearly disclose its banking relationships. The lack of transparency, along with other evidence, has many in the community doubting the company’s claims that USDT is backed “one-to-one” by US dollars.

These concerns even attracted the attention of the US Department of Justice (DOJ). The agency launched a criminal probe into the company focused on potential Bitcoin price manipulation through the use of USDT on Bitfinex. If true, Bitcoin’s price and trading volume could be overinflated.

Newest Round of USDT Issuances

Beginning Apr. 8th, Tether began increasing the circulating supply of USDT. Over the last month, the supply of USDT increased by $417 million.

The move drew criticism from Tether and Bitfinex watchdog Bitfinexed, who claims to have exposed the “Bitfinex/Tether scam” which was later covered by Bloomberg, the New York Times, and the Wall Street Journal.

Tether is once again injecting the cryptocurrency markets with nearly $400M of fake money. They've recently admitted it's not backed by dollars, but so-called 'reserves'.

Last time they injected this much fake money, we found out about CFTC subpoenas and the market crashed. pic.twitter.com/tbjan3FVaa

According to research conducted by a University of Texas professor John Griffin and co-author Amin Shams, there is evidence that Tether is engaging in Bitcoin price manipulation. According to Griffin in a June 2018 interview with Bloomberg:

“First, Tethers are created by the parent company Tether Ltd., often in large chunks such as 200 million. Almost all new coins then move to Bitfinex, he said. When Bitcoin prices drop soon after the issuance, Tethers at Bitfinex and other exchanges are used to buy Bitcoin ‘in a coordinated way that drives the price.’”

As such, the recent issuance of USDT may fit Griffin’s description. This coincides with Tether’s recent change to its terms-of-service which suggest USDT is backed by other assets and that the company is not responsible for losses endured by holders.

The recent round of issuances may actually help bitcoin prices by injecting more cash into the crypto markets. However, if confidence in USDT changes the ramifications on cryptocurrency prices could be substantial. As stated by Strix Leviathan CEO Jesse Proudman:

“Tether is worth $1 because it’s generally agreed upon that it’s worth $1, not because it can be redeemed for that dollar. Should that faith vanish, the repercussions would be material, widespread and volatile.”