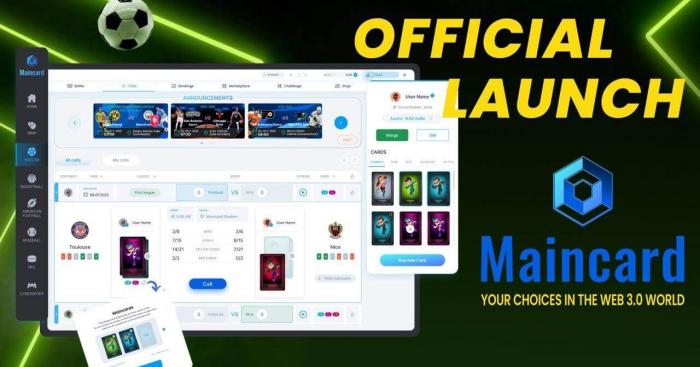 Maincard features various novel gameplay dynamics, reimagining the Web3 gaming space. To ensure the app was ready for launch, the project has run various testnets since mid-September, which have seen more than 14,000 users from 125 countries playtest Maincard. Early project supporters have already received Maincard NFTs — required to play the game — according to the help they contributed during the development process.

Maincard enables users to earn cryptocurrency for correctly predicting the results of sporting fixtures. To play the game, users must hold a Maincard NFT.

There are two game modes: Battle and Calls. In Battle mode, players use their Maincard NFT to vote on the outcome of matches for various sports. Guessing correctly earns MainCoins, which for now, are an in-game currency only. However, several exchanges plan to list MainCoins in Q1 2023.

The number of MainCoins received for correct predictions depends on the rarity of the Maincard NFT used to vote. Each week, there are also crypto prizes for the top-three players earning the most MainCoins. First place receives 3,000 MATIC, second gets 2,000 MATIC and third place wins 1,000 MATIC.

Making bad predictions costs Maincard NFTs a life. This can reduce the number of MainCoins received for making correct calls but users can restore lives by repairing their NFTs.

In Calls mode, players face off against each other. The mode carries far greater risk because your opponent takes your Maincard NFT if you guess wrong and they guess right.

The option to merge Maincards to create more powerful NFTs adds even greater variety to the gameplay. Making consecutive correct predictions adds to a card’s winning streak. When the streak reaches a certain threshold, players can combine two of the same type Maincards to produce a new, higher-level card. Alternatively, gamers can buy more powerful Maincards on the application’s in-built marketplace.

For now, Maincard supports a limited number of sports, including soccer, basketball and League of Legends. However, the project plans to add additional sports every week.

Maincard is a fantasy sports platform deployed on the Polygon network. The app enables gamers to speculate on the outcome of sporting fixtures against one another, receiving rewards via cryptocurrency or NFTs for making correct predictions. The application launched its main net after thorough testing just six months after its founders came up with the idea to spur Web3 adoption via gaming. Maincard hopes its innovative game mechanics will help encourage Web3’s mass adoption among the more than five billion sports fans worldwide.