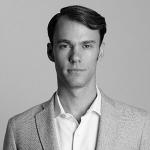 In 2006, Ehrsam graduated from Concord-Carlisle High School in Concord, Massachusetts. In 2010, Ehrsam graduated with distinction from Duke University, earning a B.S. in computer science with a minor in economics. At Duke, he was a member of the Sigma Alpha Epsilon fraternity.

After graduating from Duke, Ehrsam initially worked at Goldman Sachs in New York on the foreign exchange trading desk. He also worked in New York at BlackRock as a portfolio analyst.

Ehrsam left Goldman Sachs in 2012 to found Coinbase, a digital cryptocurrency exchange platform, with Brian Armstrong. The company went through the Y Combinator startup incubator. From 2012 to 2017, Ehrsam served as president of the company, over which time the service reached 13 million users and a valuation of $1.6 billion USD. In late 2017, Ehrsam transitioned away from day-to-day operations at Coinbase to focus on building blockchain-based apps.

In 2018, Ehrsam and Matt Huang of Sequoia Capital formed a crypto fund. Sequoia subsequently accounted that it would invest in the new fund.