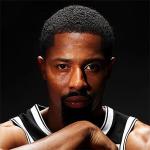 Spencer Dinwiddie has one of the highest basketball IQs in this draft class, which lends to a creative offensive approach and ability to create his own space to score. At 6’6”, Dinwiddie is an athletic, lengthy perimeter defender who excels at pushing the ball in traffic.

In his three year career at Colorado University, Dinwiddie became one of the top point guards in the country, increasing his offensive rating, free throw rate, free throw percentage, three-point percentage, assist rate and true shooting percentage in each season. He helped lead Colorado to back-to-back NCAA Tournament appearances in his freshman and sophomore seasons and has numerous accolades including the 2012 Pac-12 All-Freshman Team and 2013 All-Pac-12 first team.

Dinwiddie has been an outspoken proponent of cryptocurrency and blockchain technology, going so far as to tokenize his NBA contract on the Ethereum blockchain.