Cybercrime is generating at least $1.5 trillion dollars in revenue every year via illicit online markets, IP theft, crimeware, and ransomware. 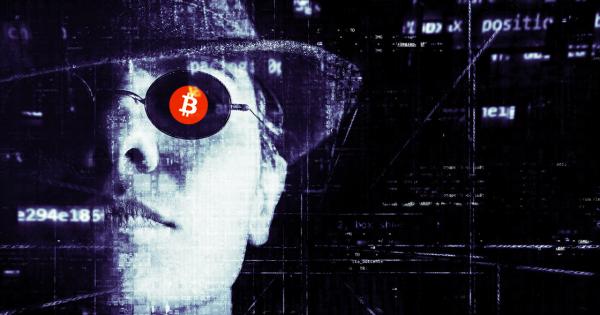 Cybercrime is generating at least $1.5 trillion dollars in revenue every year via illicit online markets, IP theft, crimeware, and ransomware. In some cases, cybercrime revenues exceed those of some legitimate companies.

A recent study, sponsored by Bromium and conducted by Dr. Michael McGuire, examined the evolution of cybercrime and cybercriminals in recent years.

Their findings were astonishing – cybercrime is turning into a trillion dollar industry, rivaling the earnings of more traditional crime. 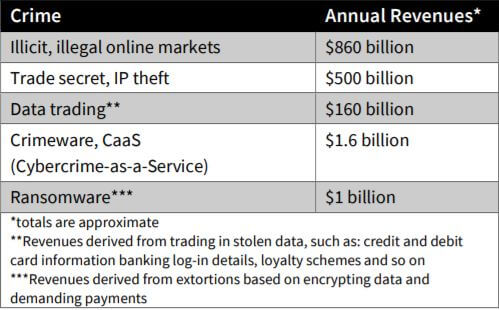 What’s even more interesting, though, is the use of cryptocurrency in cybercrime.

Bitcoin and other cryptocurrencies have become ever more popular in recent years, earning the acknowledgment of both mainstream media outlets and governments.

It appears as though cybercriminals have adopted cryptocurrency as a method of laundering their dirty money. For example, Bitcoin ATMs are becoming a fruitful tool for cybercriminals, as they are being used to convert dirty money into harder-to-trace digital assets.

Despite popular belief, Bitcoin’s underlying technology is not ideal for money laundering. Blockchain was designed for transparency – everyone can access a validated copy of the Bitcoin ledger.

In fact, researchers at Princeton have found that around 60% of Bitcoin transactions can be traced. Altcoins such as Monero and Zcash were created with transparency in mind. They are known as ‘privacy coins‘, and cybercriminals are starting to turn to Bitcoin’s anonymous alternatives.

According to the report, billions of dollars are laundered with cryptocurrency each year, and cybercriminals are just getting started. Cryptocurrencies are only going to further criminal capacity, rather than diminish it.

Does Cryptocurrency Have a Bad Rap?

Cryptocurrencies can be used by criminals to launder money and engage in illegal online activity. Notwithstanding public opinion, laundering through cryptocurrencies like Bitcoin remains relatively minuscule. A Europol estimate suggests that Bitcoin and other cryptocurrencies were used for merely 4% of the total amount of laundered money in Europe.

The mainstream media has cast a shadow on cryptocurrencies, leading the public to believe Bitcoin and other cryptocurrencies are solely used for illegal exchanges on the dark web – unfortunately, they do not mention the significant benefits that many blockchain projects are bringing to the table. Said benefits were brought to light in a recent blog post by the head of the IMF.

Keep in mind, though, that it is important to recognize cryptocurrencies’ positive initiative: to decentralize control and revolutionize the traditional economy.

For example, IOTA is an ambitious blockchain project working to interconnect machines and create a machine-to-machine economy, in which they can pay each other for services.

The first machine-to-machine payment took place on April 18th, 2018, when a mini Tesla was charged by an IOTA charging station.

Po.et is another fantastic example of blockchain’s benefits – the token is working to protect creators’ and publishers’ rights to online digital media.

Conversely, ICOs are something to be wary of. It is far too easy to find yourself a victim of an ICO exit scam, probably one of the most prevalent crypto-related cybercrimes.

The Savedroid ICO exit scam goes to show how easy it is for someone to run off with your hard earned money.

In some sort of publicity stunt, the Savedroid website replaced all of its content with the South Park ‘Aaand it’s gone’ meme. Additionally, Savedroid’s founder Yassin Hankir tweeted:

Shortly thereafter, the website came back online and Hankir published a video titled “And it’s NOT gone”. He explained exit scam was fake, only conducted to demonstrate how easy it is for an ICO to take the money and run.

Whether his publicity stunt was professional, he has a point – it is far too easy for investors to lose everything.

Into the Web of Profit

Researched and written by Dr. Michael McGuire, Into the Web of Profit is an in-depth study of cybercrime. The project was funded by Bromium, Inc.

McGuire’s research demonstrates how cybercrime proceeds are being produced, laundered, and reinvested.

McGuire delves into the realm of cybercrime in a fascinating way, taking a look at every aspect of the industry. Even with conservative estimates, the numbers are staggering.

Please reference Into the Web of Profit for more information regarding cybercrime and cybercriminals.