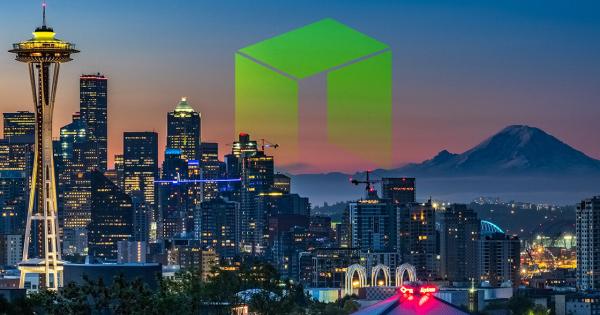 NEO announced it has established a foothold in the US market with a new office in Seattle, Washington. In an interview, Da Hongfei explains what separates NEO from Ethereum and Bitcoin—and he asserts why he believes NEO could become the number one blockchain by 2020.

Da Hongfei, the founder of NEO, announced at NEO DevCon on Feb. 16th that NEO Global Development had established a base of operations in Seattle, Washington—with immediate plans to begin recruiting. The new offices will give NEO a “significant foothold” in the US market said Hongfei.

The reasoning behind the move: Seattle’s robust software development scene. As the birthplace of companies such as Microsoft, Amazon, and Expedia—and home to large engineering offices from Facebook, Google, and Twitter—the city is an ideal place to recruit software talent.

To understand the gravity of NEO’s new US offices, it’s important to clarify how NEO is structured. According to Da Hongfei, there are two subsidiary companies under NEO Foundation: NEO Global Development (NGD) and NEO Global Capital (NGC).

NGD is responsible for executing the strategies established by the NEO Foundation and for building out NEO’s software. Meanwhile, NGC is the project’s investment arm responsible for fostering the enterprises around NEO, with Hongfei going as far as to claim that NGC is performing “better than 95 percent of crypto funds all over the world.”

“We are now in Seattle, the hometown of one of the biggest software companies in the world—Microsoft,” Hongfei proclaimed to a crowd of two hundred at DevCon. He went on to make an analogy between NEO and the software juggernaut:

“Nobody knows how to win a platform competition better than Microsoft, especially for computer language frameworks and platforms.”

And, by extension, it seems that Hongfei wants to emulate Microsoft’s success and win the blockchain “platform competition.”

For further insight into the reasons behind the move, during the interview with CryptoSlate he elaborates on why the organization chose Seattle over many other high-tech American cities:

“We tried to compare different locations in the US and Seattle seemed to be the best choice. New York is more for the financial sector. San Francisco or Silicon Valley is good for startups if you want to do fundraising, or [for] more consumer side internet companies. But, if you want to do serious software development, I think Seattle is a better choice.”

He goes on to talk about NGD’s expansion plans for Seattle. For context, there are roughly 45 people working at the NGD offices in Shanghai.

“In Seattle, we will start small but gradually expand. We don’t want all the engineers [for NEO] to move to Seattle and work in the office. NGD Seattle will orchestrate all the things [related to the development effort].”

NEO selected two former Microsoft executives to lead US initiative, John deVadoss and Peng Huang, both of which have over a decade of experience at Microsoft and were deeply involved with the development of .NET, a proprietary software development framework by Microsoft. It is also the primary programming language used by much of NEO’s blockchain.

Executives Behind the NGD Seattle

John deVadoss and Peng Huang are both co-founders of messaging app text11, a machine learning startup that they claim to have “successfully exited.”

DeVadoss is a 15-year Microsoft veteran and software engineer. During his time at the company, deVadoss was responsible for leading .NET in Microsoft’s competition with Java. DeVadoss also was one of the executives responsible for building Microsoft Digital, the segment of Microsoft responsible for tech advisory and consulting—he took the business from $0 to $500 million in revenue.

DeVadoss was appointed as the president of NGD Seattle and development head.

Meanwhile, Huang is an 11-year Microsoft executive and former strategy and marketing lead for .NET patterns and practices. Huang is now tasked with leading platform strategy for NEO.

What Differentiates NEO from Other Blockchains

During his state of NEO address at DevCon, Hongfei asked the audience:

“Why is NEO different than other blockchains? What’s the difference between NEO and Ethereum?”

To find the answer, Hongfei talks about what makes a blockchain successful. One of the best indicators, he claims, is a community’s sense of “shared mission”:

Allegedly, it’s not the different governance model or consensus mechanism that separates NEO from Bitcoin and Ethereum. Instead, Hongfei claims that major difference is “design philosophy”:

“The shared value of the communities [in NEO] is pragmatic idealism. Pure pragmatism can’t imagine a bold future and pure idealism can’t get anything done. It’s the delicate blend of both that drives innovation [for NEO].”

During the interview, he elaborates what constitutes “pragmatic idealism”:

“We are not trying to go directly at the goal. We will see what are the obstacles. Some of the obstacles we will overcome, some of them we will work around. So we are more pragmatic than other blockchains. We will find the balance and sweet point between efficiency and decentralization, between current success and future success.”

Ultimately, Hongfei’s talk about design philosophy ties into NEO’s larger mission, to become the “number one blockchain,” and not by brand recognition or coin market cap. According to Hongfei, the number one blockchain is the platform with the “best performance, a diversified ecosystem, and compliant solutions.”

“We set our mission to make NEO the number one blockchain by 2020. We only have a year, or two years, depending on how you define 2020… Time is ticking.”