An exceptionally low success rate and a substantially high risk of scams are already making the much-hyped ICOs obsolete.

An exceptionally low success rate and a substantially high risk of scams are already making the much-hyped ICOs obsolete. And now, according to a Nov. 12, report from Beyond Blocks, there might be a better, faster, and more secure way of funding blockchain projects.

The Wild West Days of Crypto Funding Are Over

The initial excitement over ICOs, with their ability to garner multi-million dollar investments and virtually no taxation or regulation, seems to have faded as rapidly as it has started. And while much of its popularity was killed by government regulation, and sometimes even outright bans, the meager success rate, and the scamming issues also attributed to the negative sentiment towards ICOs.

When implementing an ICO, a company doesn’t have to sell equity, and users can buy tokens for use, making it beneficial for both parties. However, as utility tokens are not an investment in the company itself, the users aren’t entitled to anything from the company.

This presents a problem as there’s no value to the tokens until the issuing company delivers on its promises – however, businesses rarely have insurance in place to protect investors.

As very little can be done to prevent incredible amounts of money being lost, Building Blocks raised the question if this was the right moment to offer investors a new alternative to ICOs?

A Legitimate Answer to the Anarchy of ICOs

STO stands for Security Token Offering, and it’s a new and legitimate way of funding blockchain innovation. It’s seen as a more stable alternative to ICOs, as the security tokens are ties to real securities, which often represent the company’s tokenized assets. 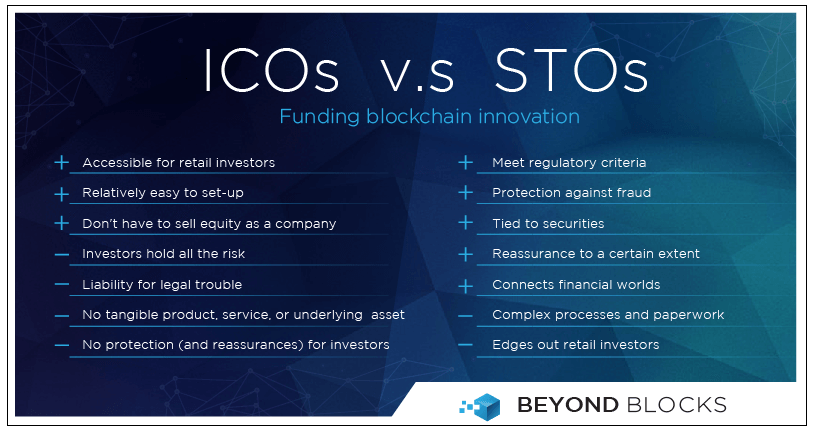 Security tokens give the buyer ownership over whatever the token represents in digital form, for example, equity, derivatives, or real estate. This type of funding can create more liquidity and make it more accessible to investors.

Apart from potentially being able to bring a lot of money to the crypto industry, STOs also require licensing by regulatory bodies such as the SEC. The risk of running into legal troubles halfway into the funding is virtually nonexistent, as all regulatory criteria will be met from the very beginning of the funding.

As an STO is fully compliant with regulatory frameworks, it also offers investors the ability to trace their investment and protects them against fraud.

“STOs have been gaining popularity for many reasons. First, the offerings are straightforward and the investors exactly know what they’re putting their money into. Security tokens are also poised to capture the proportional growth of a company if structured right. Other than that, from a traditional financial markets perspective, security tokens automates multiple functions of traditional intermediaries, thereby easing the process and reducing associated costs and time.”

However, STOs do come with setbacks, especially for companies looking into this type of funding. One of the main concerns with STOs is that some of form of security tokens don’t allow all investors into the sale. According to Building Blocks, when securities are on the regulated exchanges, most trades will be performed via algorithmic trading, thus bringing centralization.

For companies, Security Token Offerings bring complex processes and paperwork, while ICOs haven’t brought any real hassles so far, as they’re relatively easy to set up and are quite lucrative.

It is still unclear whether STOs will be able to completely replace the more lenient and lucrative ICOs, but what remains certain is that they are offering accredited investors the governance and protection that was often reserved for traditional IPOs.