Bitcoin saw a notable price surge late-last week that allowed it to surmount the resistance it was facing at $7,000 and run to highs of $7,300, which is the point at which it lost its momentum and incurred a notable rejection.

Although this movement proved to be fleeting, data seems to elucidate an interesting trend, with the sharp rise in CME futures volume and large transaction volume both pointing to the possibility that this was an institutional-driven movement.

This is further supported by the fact that open interest on Bitmex actually declined on April 2nd, showing that traders were not the suspects behind this fleeting rally.

In the time following Bitcoin’s brief surge to these recent highs, the cryptocurrency has once again found itself caught within a bout of sideways trading within the upper-$6,000 region.

This appears to be the same trading range that the crypto was caught within in late-March, and the resistance in the $7,000 region has so far proven to be insurmountable for the cryptocurrency.

One interesting factor is that this movement came about in tandem with a sudden spike in large transaction volume.

Data from IntoTheBlock, a data and analytics platform, shows that the volume of large Bitcoin transactions – defined as those being greater than $100,000 in value – spiked from its March 29th lows of $3.1 billion to highs of $5.65 billion on April 2nd, with this data showing that large buyers were backing the movement. 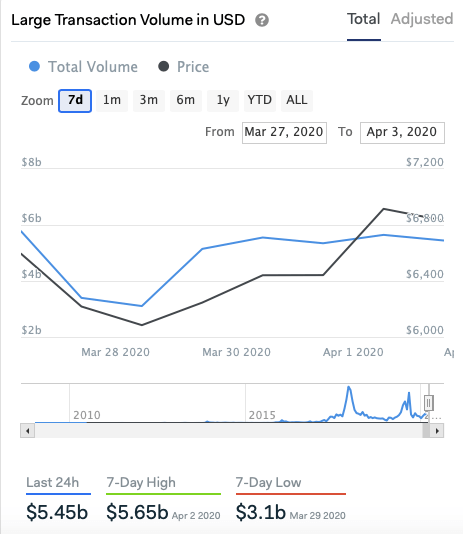 This significant buying activity may stem from large retail and institutional buyers, a notion that is further supported by the massive rise in CME futures volume, which surged from $88 million on April 1st to $347 million on April 2nd, according to data from Skew.

Because CME futures have high trading requirements and are tailored for institutions and accredited investors, the spike seen here does indicate that this rally was caused by a sudden influx of capital from non-retail investors.

Open interest on cryptocurrency platform BitMEX declined during this period, also showing that retail traders were not the ones driving the fleeting rally.

In the mid-term, this may suggest that large players within the crypto market are currently accumulating Bitcoin, potentially because they anticipate it to see further upside over a mid or long-term timeframe.

Bitcoin showed a tight correlation with the United States stock market for about two weeks from March 12, raising concerns among investors that cryptocurrencies are just as vulnerable to a financial crisis as stocks and other high-risk assets.

There’s no doubt the XRP cryptocurrency has a dedicated fan base; heck, the cryptocurrency community has fittingly branded supporters of the asset the “XRP Army.” But the altcoin has equally as many skeptics who believe the asset is intrinsically worthless, like how some see Bitcoin as an asset really worth $0.

Ethereum has been caught within a firm uptrend in recent times that has allowed it to gain some serious ground against Bitcoin in recent weeks.

Bitcoin’s price action over the past few weeks has undoubtedly been impressive.