The International Monetary Fund stated that Bitcoin's status as legal tender is posing risk to the country's financial stability and system. 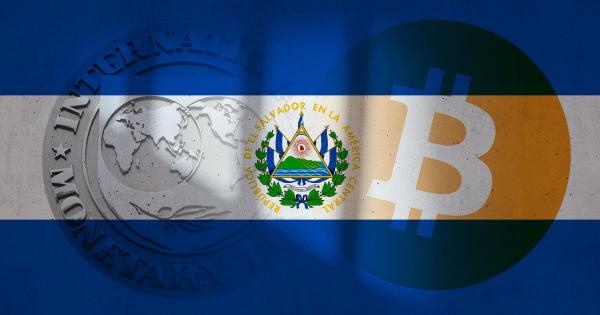 The report released on Tuesday was published after conducting bilateral talks with El Salvador, which has been engaged with the IMF regarding negotiations concerning a $1.3 billion loan.

As per the official IMF statement, the adoption of cryptocurrency by El Salvador ” entails large risks for financial and market integrity, financial stability, and consumer protection. It also can create contingent liabilities.”

The report further reiterated that the nation should “narrow the scope of its Bitcoin law by removing its status as legal tender.” In September 2021, El Salvador became the first nation in the world to have adopted Bitcoin officially as legal tender.

This is not the first time the IMF has raised questions about El Salvador’s decision to adopt Bitcoin as legal tender. In November 2021, the organization had prompted the Central American nation to bolster the regulation and supervision of their newly adopted cryptocurrency ecosystem.

The report also raised concerns over risks associated with issuing Bitcoin-backed bonds. The statement also noted IMF directors acknowledging Chivo wallet to facilitate digital payments as a part of “boosting financial inclusion.” However, the directors also underlined the need for “strict regulation and oversight” that needs to be practiced in the following domain.

El Salvador’s president Nayib Bukele has been a strong Bitcoin proponent and is popularly known to have been spearheading the adoption of Bitcoin in the country. Bukele had recently purchased 410 Bitcoins, taking the total BTC stash held by the country to a striking 1500. The nation is also exploring Bitcoin-backed bonds and is planning to issue them shortly. The bonds issued will reportedly possess a ten-year duration and will be US dollar-denominated.