Every bank seems to be jumping on the crypto bandwagon. Except HSBC. 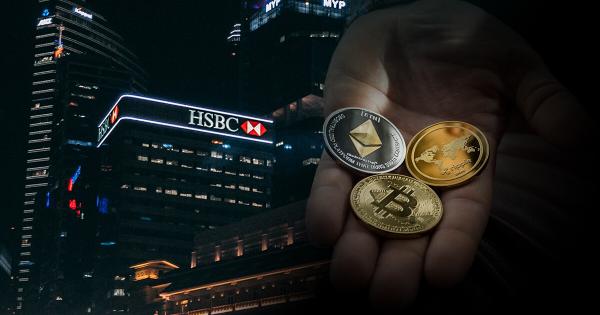 London-based HSBC Holdings, one of the world’s biggest and Europe’s second largest bank, has no plans to offer Bitcoin or crypto products to its clients, a report on news outlet Reuters said today.

Bitcoin not for us

The comments come as banks like JPMorgan, Goldman Sachs, and DBS (Singapore) roll out their own crypto offerings for clients interested in the sector as well as native products. DBS, for one, launched its own crypto exchange last year, while Goldman is said to be exploring a crypto-centric ETF.

However, HSBC’s sitting out for now: “I view Bitcoin as more of an asset class than a payments vehicle, with very difficult questions about how to value it on the balance sheet of clients because it is so volatile,” said Quinn in comments to Reuters.

But HSBC’s not only away from Bitcoin, but also from companies linked to Bitcoin. As CryptoSlate reported earlier this year, the bank banned clients from trading the stocks of US business analytics firm MicroStrategy citing its Bitcoin holdings. MicroStrategy sits on over $1.5 billion worth of Bitcoin, a position it accumulated over 2020, with its stock rising in tandem with BTC prices.

HSBC’s new ‘policies,’ however, choose to steer away from that, as the below leaked email shows:

HSBC Bank preventing their customers from holding an equity because it has Bitcoin on it's balance sheet!

“CBDCs can facilitate international transactions in e-wallets more simply, they take out friction costs and they are likely to operate in a transparent manner and have strong attributes of stored value,” he stated, adding the bank was already in talks with Britain, China, Canada and the United Arab Emirates about such initiatives.

That said, stablecoins didn’t win his favor either. “Stablecoins which do have some reserve backing behind them to address the stored value concerns, but it depends on who the sponsoring organization is plus the structure and accessibility of the reserve,” he ended.