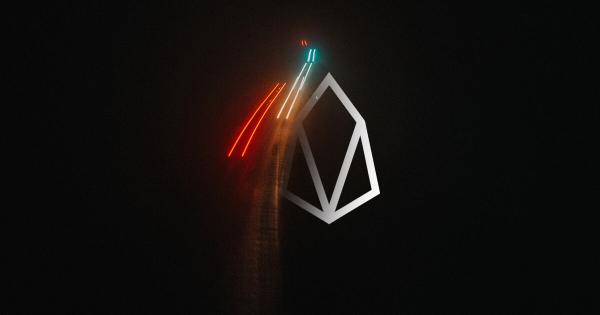 EOS, like most major altcoins, is currently caught in a short-term downtrend that has come about as a result of Bitcoin’s recent rejection at $8,400. It, however, still remains in a firm uptrend while looking at its 30-day price action, and technical analysis may suggest that it is primed for significantly further bullishness.

One factor that could provide some drag to any near-term bullishness is the fact that users on the blockchain platform have fallen off a cliff over the past few months, even though its transaction volume has been able to incur some steady growth.

EOS is one of many so-called “Ethereum killers” that was launched in an attempt to provide a decentralized blockchain platform that offers scalability to projects looking to build on top of it.

The ongoing crypto winter, however, has dried up the decentralized application (Dapp) markets, leaving only a handful of active projects that tend to favor Ethereum over the rest of the competing platforms.

This is emblematic while looking at EOS’ user data, which has declined significantly over the past few months, diving from nearly 110k users in October of 2019, to just over 10k users presently – according to data from Dapp Review.

Interestingly, it should also be noted that EOS transactions have been climbing over the same period of time, expressing what appears to be an inverse correlation with usership.

Although fundamental factors like this may spell trouble for an asset’s long-term value, in the near-term it appears that all price action is being driven solely by technical factors, which is a good thing for EOS.

Scott Melker — a popular cryptocurrency analyst on Twitter who goes by the pseudonym “The Wolf of All Streets” — explained in a recent tweet that EOS is one of the only major cryptocurrencies that currently appears to be expressing notable bullishness due to breaking its downtrend. He said while pointing to the below chart:

“EOS: That said, $EOS has actually broken its downtrend and is currently retesting the channel as support. This looks bullish AF if BTC does happen to rise.”

If the crypto is able to catch some momentum here independent of the aggregated crypto market, it could soon become one of the best performing altcoins in 2020.

Block.one, an open-source software publisher, announced that it will start voting for EOSIO’s public blockchain upgrades.