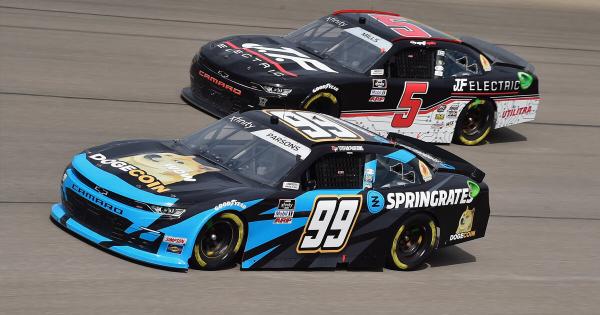 A Dogecoin-branded race car crashed into the wall during Saturday’s NASCAR race on its return to the track, finishing last and causing a temporary price dump on DOGE.

#DogeCar even trended on global Twitter for a while, reaching up to 26th rank on the popular tweets charts.

At the NASCAR Xfinity Series race in Nashville on Saturday—during Stage 2 of the Tennessee Lottery 250—Parsons slammed into the wall right before the finish line and saw his bonnet getting rekt.

The #dogecar has crashed. ?

The car made contact with another racer before swerving into the grass and then going across the track straight into the wall. It went sideways along the track for several feet before Parsons regained composure and got the car into control. He finished 36th as a result…or last.

Parsons left the crash site safely, and no other casualties were reported as of press time. Still, the historic race left the dogecar licking its wounds and seeing traders sell DOGE en masses, with the memecoin down over 5% since Sunday.

Dogecoin has shown up at auto racing events in the past. 2014 was the first of such instances when racer Josh Wise drove a Dogecoin-branded car sponsored by DOGE traders from Reddit. It created massive hype for the then-unknown memecoin at the time, just a few months after its creation.

Nashville week! DogeCar is back ?? pic.twitter.com/9QgljcpLt6

The branding returned this year, albeit with a different driver. Stefan Parsons mans the DogeCar now, driving a ‘99’ number, black with blue highlighted Chevrolet Camaro. And while the hype was much, much larger than Wise’s races, the outcome was wildly different.

Crypto pioneer said 90% of NFTs would be worthless as he addressed the power of Doge.

Who knew the ‘joke’ currency would outperform just about any asset outside of the crypto space?