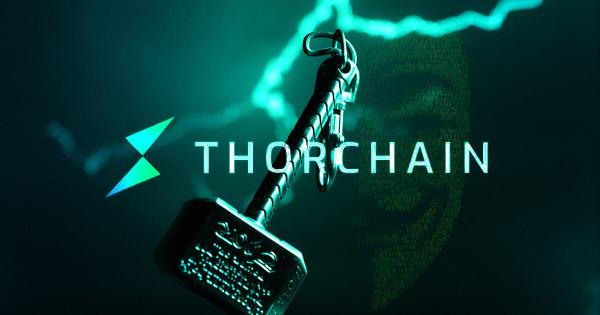 ThorChain, a decentralized finance (DeFi) token swap protocol based on the Cosmos blockchain, lost roughly $4.8 million worth of Ethereum (ETH) from its liquidity pools to a hacker attack today.

“During a live attack, the network has been halted. Approximately 4,000 ETH of value was extracted from the protocol. While the treasury has the funds to cover the stolen amount, we request the attacker get in contact with the team to discuss the return of funds and a bounty commensurate with the discovery,” ThorChain developers stated in the protocol’s Telegram channel.

However, the actual loss was later revealed to be a bit smaller, totaling around 2,500 ETH (worth roughly $4.8 at current prices)—and a far cry from the initially reported 13,000 ETH (about $25 million).

“Original loss was estimated at 13,000 ETH but is now estimated to be 2,500 ETH. The discrepancy may be due to additional loss from arbitrageurs taking advantage of the price manipulation,” the developers noted in their updated post mortem announcement.

As a result of the attack, Thorchain’s team had to pause the network, drawing additional ire from DeFi enthusiasts for allegedly not being “decentralized” enough.

The first class citizen of THORChain are LPs. Nodes service the network to protect LP capital. Swappers have their swaps honoured, unless maliciously affecting LP capital.

This is primary rule of THORChain, upheld in code.

Amid the fallout from the attack, the price of Thorchain’s native token RUNE has decreased by around 15% over the past day and slid down to around $4.75, according to crypto metrics platform CoinMarketCap.

In their response, ThorChain developers pointed out that only the platform’s Ethereum liquidity providers (users who locked their ETH on the protocol to help facilitate swapping) suffered losses. Ironically, some of the network’s participants might’ve even profited from the hacker attack.

“The attacker paid huge slip fees, approx $1.4m was captured by nodes, with further $1.4m by ERC20 [liquidity providers]. Only users affected are ETH LPs, and they will be made whole. So despite the exploit, Nodes, LPs and Arbers will stand to profit considerably,” ThorChain tweeted.

As such, roughly $5 million worth of ETH will be taken out of the ThorChain treasury and used to reimburse liquidity providers that were affected by the hack.

“This is the purpose of the treasury during Chaosnet, to insure the network funds,” ThorChain developers concluded.