SEC opposes third parties seeking to defend Ripple, Do Kwon describes news of $40M crypto freeze as falsehood, and much more in this edition of CryptoSlate Wrapped Daily. 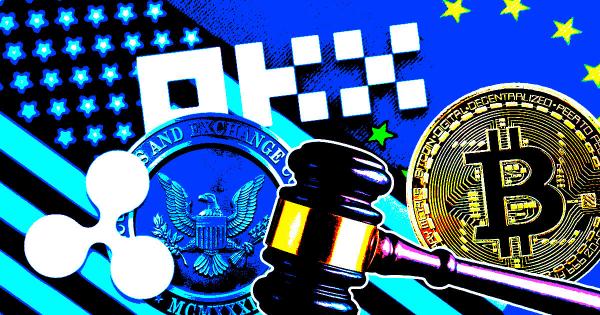 The biggest news in the cryptoverse for Oct. 5 includes SEC opposing third parties seeking to defend Ripple, Do Kwon describing news of a $40 million crypto freeze as falsehood, and SWIFT showing CBDCs, tokenized assets can be integrated into the global financial system.

Two firms I-Remit and Tapjets had filed a motion seeking to submit their amicus briefing to prove the utility of XRP beyond speculation.

The SEC opposed the motion on the grounds that the court’s prior order prohibits third parties from interfering in the case. The commission also alleged that Ripple may have influenced the proposed evidence.

Reports emerged earlier today that South Korean prosecutors have frozen around $40 million linked to Do Kwon from crypto exchanges, KuCoin and OKX.

Do Kwon described the news as “spreading falsehood” claiming that he does not have any account with KuCoin and OKX.

Following the listing announcement and bullish reaction from the community, GMX spiked 35%, reaching a new high of $54.11, before retracing to $48.7 as of press time.

Russian authority has reportedly blacklisted crypto exchange OKX’s IP address (okx.com) for allegedly violating article 15.3 of the federal law, which may be related to extremist activities.

Similar to Binance’s IP ban in June 2021, OKX may move to file a lawsuit against Russia’s internet censorship agency to know the exact reason and possibly get the ban lifted.

Bullish sentiment seems to be returning to the market as leverage traders push BTC futures trading volume to an all-time high.

Traders used  USD/stablecoins as leverage in the futures open contracts to pump BTC price above the $20,000 mark, however, it was rejected around the $20,400 level.

Despite shedding off over 56% of its gain since January 2022, Bitcoin has outperformed crypto-related stocks.

Coinbase stocks are down 76%, Block is down 62% and MicroStrategy stocks have lost up to 58%. Overall, traditional crypto stocks have underperformed by over 74% and lost about three times more than the S&P500 year-to-date.

Regulators in California had earlier filed a cease and desist order against Nexus over its Earn Interest Products.

Nexo co-founders Trenchev and Kalin Metodiev during an AMA session said the company was complying with the regulators, it has placed required restrictions on its earn offerings to protect users’ funds.

Addressing rumors of insolvency, the co-founders said that “insolvency, and bankruptcy are nowhere in Nexo’s reality.”

Given the growing popularity of crypto assets, the Financial Stability Oversight Council (FSOC) has released a report detailing how crypto could negatively impact legacy markets.

Japan to invest in metaverse, NFTs to drive implementation of Web3 services

Kishida has announced that Japan will expand its investments into the metaverse and issue NFTs to encourage local authorities to solve jurisdictional issues using web3 technologies.

Immunefi’s latest crypto losses report revealed that the web3 ecosystem lost over $428.7 million to 39 exploits in the third quarter of 2022.

The much-lauded Nomad  Bridge and Wintermute hacks account for 79.85% ($350 million) of all losses reviewed over the period.

Approximately $93.8 million, representing 4% of total losses were recovered by the affected projects.

According to REXT database, the DeFi ecosystem has lost over $60 billion across 1,195 events, with $2.4 billion recovered so far in 2022.

About $170 million was lost in September alone, representing an 18% decrease from the previous month. The Wintermute hack accounted for $160 million, while $977,550 was lost to the profanity vanity address exploit.

The withdrawal freeze forces many miners to leave the pool causing its hash rate share to fall to 4% and its revenue to drop from 120 BTC to 36 BTC, as of press time.

Loftis said he found it interesting to see that many Salvadorans turn to Bitcoin to power their small businesses.

EU to discuss crypto rules with US

The European Union is set to discuss crypto regulation extensively with U.S. officials during the IMF meeting being held next week, Bloomberg reported.

According to EU commissioner McGuinness, the EU and the U.S. can collaborate to lead the way for international regulation of the crypto industry.