On Tuesday, February 11, pro-crypto presidential candidate Andrew Yang has dropped out of the 2020 race after a “bitterly disappointing” outcome in the New Hampshire primary where he trailed in a dismal eighth place. 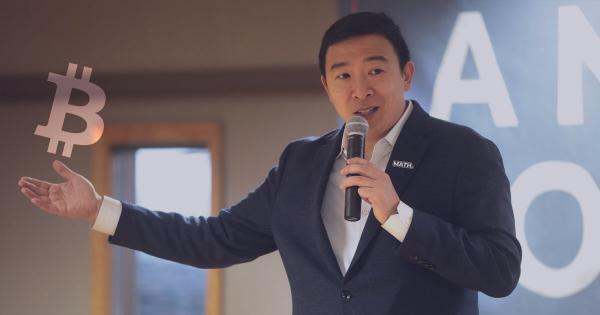 On Tuesday, Feb. 11, pro-crypto presidential candidate Andrew Yang has dropped out of the 2020 race after a “bitterly disappointing” outcome in the New Hampshire primary where he trailed in a dismal eighth place.

Yang’s campaign drew a lot of attention inside and out of the cryptocurrency space based on his pledge of a universal base income giving all Americans $1,000 a month to counter the effects of job redundancy through increasing automation.

Highly tech-savvy and self-proclaimed as “a numbers guy,” he announced his withdrawal from the campaign telling the crowds:

“I am the math guy and it is clear from these numbers that we are not going to win the race.”

Yang caused quite a stir among the cryptocurrency community for his pro-bitcoin stance. In fact, he even campaign accepted donations in BTC and made cryptocurrency a key part of his agenda.

New Policy #22 – Digital Asset/Cryptocurrency Regulation. Investment in cryptocurrencies and digital assets has far outpaced our regulatory frameworks. Investors need to know what their treatment will be in order to properly innovate in the U.S. https://t.co/PyzRfy1t9a

On his campaign page, he recognized that “blockchain has vast potential.” He also stated that cryptocurrencies and digital assets had grown quickly and “represent a large amount of value and economic activity.”

However, he said that this quick growth has “has outstripped the government’s response.” If elected, Yang proposed to establish a proper national framework for cryptocurrencies that would allow the U.S. to compete with other jurisdictions such as China and Europe. He stated:

“It’s time for the federal government to create clear guidelines as to how cryptocurrencies/digital asset markets will be treated and regulated so that investment can proceed with all relevant information.”

Indeed, Yang was the only presidential candidate to thrust cryptocurrency front and center in his campaign and propose legal clarity on the situation.

Yang may be out but he’s not down

Alas, it was not to be. The presidential candidate of East Asian descent dropped out of the race yesterday after garnering just 2.8 percent of the votes in the New Hampshire primary.

In an emotional speech to supporters, Yang reminded the crowds that he was “a numbers guy” and could not win the race based on this performance.

He also said in an interview before addressing them:

“In most of these [upcoming] states, I’m not going to be at a threshold where I get delegates, which makes sticking around not necessarily helpful or productive in terms of furthering the goals of this campaign.”

Clearly, this was not the result that he or his supporters wanted. However, he assured them that their time had not been wasted.

Yang may be out, but he’s not down. He thanked and acknowledged his supporters for their “hundreds of thousands of hours” of work and said:

“We’ve accomplished so much together… We highlighted the problems in our communities as our economy is being transformed before our eyes by technology and automation.”

Frequently mocking himself as a “math guy” and a “nerd,” and being young, immigrant and tech-savvy, his natural charisma appealed to many who called themselves the ‘Yang Gang’ and often attended rallies in his trademark “math” hats.

In his closing speech, he reminded supporters of how far they had come and said:

“This is just the starting line, this campaign has awoken something fundamental in this country and ourselves.”

One emotional supporter cried out, “We love you Andrew!” which kickstarted the crowd into chanting his name “Andrew Yang”, “Andrew Yang”, over and over.

Acknowledging his following on Reddit, one of Yang’s campaigners posted:

“Dearest Yang Gang: There is a bright future for us, we’re not giving up our ground. I’m here to keep fighting, I hope you’ll keep it up too. There’s plenty of work left to be done. Good game everyone – Love you all.”

“Our guy did something AMAZING. Seriously.”

“He brought universal basic income into the mainstream, much the same way Bernie did the $15 min. wage in 2016.”

“Wow. Wow. Wow. It’s been the honor of a lifetime to fight for this campaign.”

Even those who didn’t support Yang respected him for the hard work and passion he injected into his campaign. One Redditor commented:

“I’m a Sanders supporter, but I liked Yang a lot, especially since he made the idea of a UBI mainstream. The fact is that UBI is an inevitability, and I’m happy Yang was forward thinking.”

At this point in time, Yang has not come out in support of any of the other candidates. However, he did state that he would make his opinion known, “If [he became] persuaded that there’s a particular candidate that gives us a superior chance of beating Donald Trump.”