According to Andrew Yang, an American 2020 Democratic presidential candidate, the underlying technology of cryptocurrency like bitcoin, called blockchain technology, is powerful. 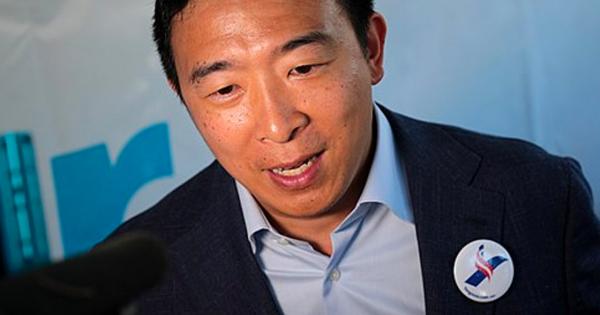 According to Andrew Yang, an American 2020 Democratic presidential candidate, the underlying technology of cryptocurrency like bitcoin, called blockchain technology, is powerful.

Universal bitcoin income with the usage of cryptocurrency

In an interview with David Choi and Michelle Phan who have nearly 10 million subscribers on YouTube combined, Yang stated that the hype may have gotten in front of the development of cryptocurrency but reality will catch up over time.

“I have many friends in the cryptocurrency community and I’m a believer in the underlying technology in particular. The blockchain has a world of potential. It’s like a lot of other technologies where right now, the hype sort of got a little overblown but the underlying technology is very powerful. What happens in these cycles is that it tends to be the hype gets in front of it and then the air comes out of the bubble but then the reality ends up catching up over time.”

When asked about the possibility of using bitcoin or cryptocurrency in general as a part of the universal basic income or the freedom dividend, the main initiative of the Yang campaign that gives out $1,000 to individuals on a monthly basis, Yang responded positively, stating “I like where you’re heading.”

While most blockchain projects and cryptocurrency-related initiatives have struggled to demonstrate major progress in the past several years, major cryptocurrencies like bitcoin have shown continuous growth over a long period of time.

Based on the data provided by Blockchain, the largest wallet service provider in the global market, just about every fundamental indicator of bitcoin has improved in the past year.

Getting to the next step of adoption

For cryptocurrency like bitcoin to see wider growth and adoption as a payment system, a store of value, and alternative currency, its usage amongst the broader market of investors and users has to increase significantly.

Clarity on existing regulatory frameworks surrounding crypto assets and businesses supplementing the asset class remains a variable in the long term growth of the sector.

As government agencies and relevant financial authorities introduce more practical regulations and frameworks to govern the cryptocurrency sector, the growth of the market and the industry is expected to expand.

To watch the full podcast with Andrew Yang, see below:

United States president Donald Trump finally expressed his views on Bitcoin and cryptocurrency, and the POTUS is not a fan. 3 min read